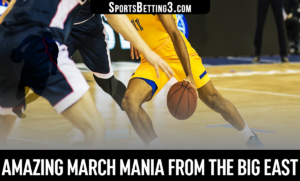 March Mania betting has begun, and already, people are talking about the Big East’s contribution to the magic set of 65 teams. Louisville, Connecticut, and Pittsburgh all claimed number 1 seeds in the tournament. Syracuse and Villanova captured number 3 seeds respectively, giving huge credence to the power of the Big East basketball program.

Whether these teams make it to the Final Cuatro is unknown, but one thing is for sure: people have fully realized that the Big East, once dwindling in reputation and talent, is now officially back in the game.

Have a look at this article, which features some great commentary: Big East Puts up 3 number 1 seeds
Written by Eddie Pulls of the Associated Press