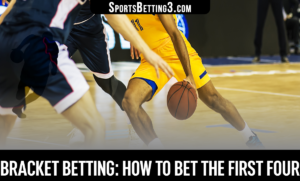 In 2011, the First Four was created for the NCAA Division I Men’s Basketball Tournament, and this year, the women’s tournament will follow suit. In the previous years, we got a couple of battles of 16 seeds while we also had the pleasure of enjoying two games between some No. 11’s. So, how do you bet the First Four?

The best teams to bet on in the First Four are the ones that can go to the Final Four. Obviously, that is not a difficult task, but Johnny Juzang and the UCLA Bruins accomplished it last year:

From the First Four to the Final Four.

Virginia Commonwealth University also accomplished the task in the first year of the First Four: 2011. However, they were even more impressive coming from a mid-major. Everyone remembers Shaka Smart and the No. 11 Rams beating Purdue and Kansas en route to a Final Four appearance. VCU fell to the Butler Bulldogs in the national semifinal.

In order to go from First Four to Final Four, you have to find those special teams that you think will play above and beyond in the postseason. Both VCU and UCLA are the only First Four teams to advance to the Elite Eight, and both of them impressively won their Elite Eight matchups. So, how to do you find those teams that can win multiple games?

How to Find the Teams that can Win Multiple Games

Well, we had strong coaches with both Smart and Mick Cronin, so that is a start. Also, since we do not know the matchups yet for the First Four, it will not be easy to find the diamond or diamonds in the rough yet.

However, last year, Loyola Chicago surprised everyone by advancing out of the first weekend as a No. 8 seed. They did that by shutting down University of Illinois. According to KenPom.com, Loyola Chicago was the 10th best team in the nation in terms of adjusted efficiency margin. That is your way to go for this year as well. Make sure you find those underrated teams after Selection Sunday, and the brackets are released.

In addition, take a look at the most frequent 3-point shooting teams. Among the non-power conference teams who have punched their NCAA tournament tickets, Bryant and Chattanooga have the most 3-pointers, so those should be the teams to keep an eye on. It is not a bad idea to take a look at the 2022 Pomeroy Ratings as well though.