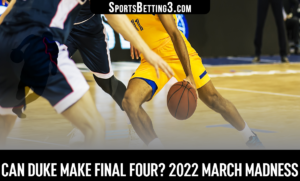 Believing in fairy tales isn’t the best way to form a betting strategy. Duke coach Mike Krzyzewski announced before the 2021-22 Duke men’s basketball season that he would be stepping down.

As you may expect if you follow college basketball, Duke has been excellent during its final season with Coach K. The Blue Devils won the ACC regular season title for the first time since 2010, compiled a 28-6 overall record and a 16-4 record in conference play. However, whether this group of Blue Devils can send Coach K out with a title remains to be seen. Coach K has led Duke to 12 Final Fours in his career that spans back to 1981 and has captured five national championships.

Duke is a No. 2 seed entering the NCAA Tournament and are in a difficult West Region. For more on how to bet on college basketball, check out our  college basketball betting guide. Here’s an overview of some reasons, why and why not Duke could reach the Final Four.

Duke has been iffy down the stretch

Much was made of Duke’s final game against rival UNC at Cameron Indoor Stadium. Coach K was 50-46 in his career against the Tar Heels, including a 33-27 record at home. However, at the end of the season the Blue Devils got bowled over by UNC on March 5.

Duke gave up 55 points in the second half and didn’t look like the team that had dominated in league play. Those defensive woes would continue in a loss to Virginia Tech in the ACC title game. With another chance to send Coach K out with a milestone victory, the Blue Devils’ defense folded.

Virginia Tech outscored Duke by 12 points in the second half on the way to a 82-67 victory. That loss likely cost the Blue Devils a chance at the No. 1 seed.

The Blue Devils shouldn’t have an issue with Cal State Fullerton in the first round or the winner of No. 7 Davidson or No. 10 Michigan State in the second round. However, Duke would potentially have a matchup problem should No. 3 Texas Tech reach the Sweet 16.

The Red Raiders are a ferocious defensive team that has plenty of offensive punch. Texas Tech only allows opponents to score 60.7 points per game and shot 38.5 percent from the field, which ranks 14th and 10th nationally, respectively.

Gonzaga is an excellent offensive team that is deservedly the overall No. 1 seed in the tournament. However, the Bulldogs don’t seem to be quite as potent as the team that reached the national championship game last season. Duke showed they can more than just compete with Gonzaga by knocking off the Bulldogs 84-81 Nov. 26, 2021 on a neutral floor in Las Vegas.

Both teams have grown since their first meeting, so no one is expecting everything to go the same way, but Duke has the confidence in knowing it has already beaten the top team in the region.

The Blue Devils have balance

While defense has been an issue, Duke has shown it can still score. Freshman phenom Paolo Banchero leads the team by average 17.0 points and 7.8 rebounds per game. He is one of five Duke players who average in double figures scoring. If the Blue Devils can continue to maintain that level of production on offense, they can be a difficult out?

Will Coach K get back to the Final Four?

It is not impossible Duke will navigate through the four games they need to win to reach the national semifinals. However, the Blue Devils need to regain their identity on defense to be able to keep progress. In the early rounds, it is possible to win with superior athletes against smaller schools.

However, once Duke gets to the point where it has to lock horns with Texas Tech and Gonzaga, the Blue Devils will need to have their act together. Coach K is an excellent coach who will forever, but he will not be adding a 13th Final Four appearance to his resume this season. The Blue Devils will come up just short and fall in the Elite 8 in a rematch with the Bulldogs.