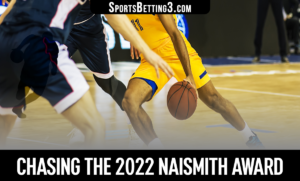 Winning the Naismith Award is much different than winning a Heisman Trophy. While college football tends to reward upperclassmen on strong teams, college basketball has no issue honoring a freshman. When you look at a futures betting guide, you can see there is plenty of value in trying to forecast award winners.

There are a number of strong candidates available to win college basketball’s player of the year award available at good prices.

Gonzaga senior Drew Timme is the prototypical old-school college basketball player. Timme has grown steadily throughout his time with the Bulldogs and leads a deep Gonzaga team by averaging 17.9 points per game.

The Bulldogs have been in the top five in the rankings from the beginning of the season and are likely set for another deep run in March Madness. Timme, who also has an award-winning mustache, also contributions 6.0 rebounds and 2.4 assists per game for Gonzaga.

This Oscar Goes To

Kentucky coach John Calipari may have been the biggest winner of the transfer portal. Calpari was able to lure Oscar Tshiebwe from West Virginia and get him to head to Lexington, Ky.

Tshiebwe, who is the current betting favorite at +360 to win this award, has been a double-double machine for the Wildcats. Tshiebwe averages 16.1 points and 15.2 rebounds per contest. His rebounding total leads the country.

The Wildcats are a solid top-25 team, but haven’t set themselves apart as a national title contender yet.

Wisconsin sophomore guard Johnny Davis leads the Badgers with 21.4 points, 8.3 rebounds, 2.4 assists and 1.3 steals per game. More importantly, Davis has transferred a Badgers team that was fairly lightly regarded in the preseason to a Big Ten title contender.

Duke is sitting atop the ACC regular season standings thanks in large part to Duke freshman forward Paolo Banchero. Banchero, who is +1200 to win the Naismith Award, leads the Blue Devils with 17.8 points and 8.3 rebounds per game. He also contributes 2.6 assists per game and shoots 49.6 percent from the field

Perhaps some voters will be swayed by nostalgia of having a strong UCLA program making waves and elect a longshot. The Bruins, who have been in the top 10 for a good portion of the season, are led by Johnny Juzang, who is +3300 to win the award.