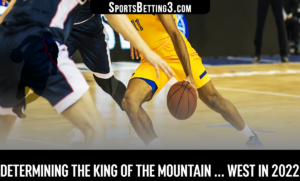 Many of the major NCAA basketball conferences have clear favorites to win the regular season conference crown. But the Mountain West Conference is in the thick of a competitive race that will likely go down to the wire.

Finding different ways to bet on college basketball can be found in our betting guide. the nice thing about placing futures bets is that it is a good way for bettors to find plus money. These bets also provide an excellent opportunity to hedge later on to guarantee a profit.

When it comes to the Mountain West Conference race, the three teams at the top are are all within one game of each other. There is plenty of value to be found in this tight race.

Should Broncos be favored?

Boise State, which is 20-6 overall and 11-2 in conference play, is currently the betting favorite, with +125 betting odds and a one-place lead over Wyoming. The Broncos have been fantastic on defense, ranking 13th nationally by limiting their opponents to 59.8 points per game. Boise State has five conference games remaining, including three home games.

However, the Broncos will have to travel to Colorado State and try to beat the Rams, who just toppled Boise State 77-74. Also, Boise State has struggled to protect home court in comparison to some of its competition at the top of the conference. The Broncos are 10-3 at home this season.

There is also some concern about Boise State’s 3-point shooting, which has struggled all season.

Wyoming will have short stay in Top 25

The Cowboys, who are in second place with a 21-4 overall, 10-2 Mountain West record, have split with Boise State this season. The Cowboys had just broken into the top 25 in mid-February after compiling a five-game winning streak. Wyoming then suffered a nine-point road loss to a mediocre New Mexico team.

The Cowboys, who are +150 to win the conference, have been unstoppable at home, running up an 11-0 record. Wyoming has been one of the strongest shooting team in the Mountain West. The Cowboys rank 26th nationally by shooting 47.3 percent from the field.

Rams can make a charge

Colorado State trails Boise State by a game and are +350 to win the Mountain West. The Rams, who were preseason favorites to win the league, have a 20-2 overall record and 10-3 in conference play. Colorado State has been undone in several bizarre performances, including taking a 30-point loss to San Diego State Jan. 8 on the road.

The Rams, however, have won four in a row are starting to look like the team people thought they could be. Colorado State is the top shooting team in the conference by field goal percentage, ranking fifth nationally by knocking down 49.5 percent of its field goals.

David Roddy does everything for Colorado State, leading the Rams by averaging 19.3 points, 7.7 rebounds and 1.3 steals per contest.

Colorado State has a nice path to stealing the title at a +350 price. If the Rams can avoid potential pratfalls with road matchups at New Mexico and UNLV, which beat Colorado State earlier this season, there is a path to first place. The Rams will host both teams above them down the stretch.