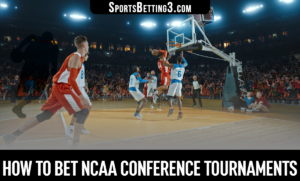 The NCAA conference tournaments are upon us, and what we all need to know is how to bet them. The lesser-known conferences present value, but could also have large swings and inconsistent offenses. Variability is higher in the college game in general than in the pros, so let us see if we can get a good plan together for you.

First, let us just say that we hope you do not have to worry about a situation like this one:

They are the first men’s D-I basketball team to play just 5 players in a game since 2000 (Jacksonville St vs Charleston Southern). pic.twitter.com/LfbbgaYtNl

The first rule of thumb for finding college basketball in conference tournaments is to definitely take the hot teams:

Let us start with the two hottest teams — and the only undefeated college basketball squads in conference play:

Unfortunately, the big-conference powerhouses do not have lengthy winning streaks at this point in the season, so we may have to start with the mid-majors. Neither of these teams has played difficult competition this season, so Murray State (Ohio Valley Conference) and South Dakota State (Summitt League) will try to feast in their conference tournaments.

On March 5, the Summitt League begins, and South Dakota State should win it all. They seem to have a slightly better chance at taking down the competition in Sioux Falls, South Dakota — hint, hint — than the Racers do in Evansville, Indiana. The Jackrabbits’ home-state advantage will be very nice for them while Murray State traveled to Indiana and get one of two double-byes.

Other notable hot teams are the following: North Texas (14 straight wins), Colgate (12), Kent State (11), Texas State (9), and Purdue Fort Wayne (9). Some familiar NCAA tournament teams from previous years have been dominating their conferences as well with eight straight wins heading into Wednesday: Stephen F. Austin, VCU, Middle Tennessee State, and Winthrop. Those teams are decent ones to back as well.

Let us take another look at how to find winners in the conference tournaments: who has previous success in tournaments?

2. Who Always Plays Well in the Conference Tournaments?

So, who are those perennial powerhouses in conference tournaments? Speaking of the Summitt and Ohio Valley, both the Jackrabbits and Racers have experienced success within the last five years. So have the No. 4 Duke Blue Devils with tournament victories in 2017 and 2019. Also, No. 11 Villanova took the Big East tournament in three straight years (2017-19).

Duke and Villanova look like teams to back throughout their conference tournaments, but let us take a look at a tournament that tends to get wild, and that is not just because it will be in Las Vegas. Make sure to not bet against Dana Altman and the Oregon Ducks (tournament champs in 2016 and 2019), who are often a dark horse.