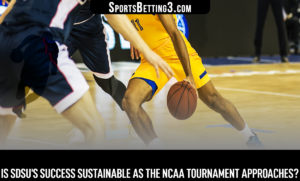 San Diego State recently stretched its record to 26-0 overall with a win over Boise State. This win puts the Aztecs six games out from the NCAA tournament with a strong chance to go into selection Sunday as an undefeated one seed. But college basketball fans and bettors alike have to wonder one thing: Can SDSU continue this success into the postseason?

The Aztecs have the Opportunity to Prove Themselves

While it’s definitely impressive for any team to go undefeated, it’s much more likely to happen to a team in the 11thranked conference in college basketball as opposed to a team in the Big Ten or ACC. If you asked most fans whether or not SDSU would beat Duke or Kansas today, they would probably say no. The truth is though; nobody can answer this question. Not until the Aztecs play a top ten opponent. To most, that’s where the beauty lies in a 68 team tournament. A team’s opportunity to win a championship isn’t strictly based subjectively on their past accomplishments. There won’t be a UCF football situation where a team feels that they were robbed of a chance at a national championship – the best team will be in the pool of 68.

Is SDSU, Among Other Mid-Major Teams, a Contender?

Three mid-major teams currently stand in the top 6 of the KenPom Rankings: Gonzaga, SDSU, and Dayton. The KenPom rankings, officially called Pomeroy College Basketball Ratings, measure a team’s ranking based heavily on future projections, rather than past games. The rankings take out any subjectivity in its rankings, using only advanced statistics to predict future matchups. This explains why teams like unranked Michigan State and 25th ranked Ohio State are in the top 10 in KenPom Rankings. This also amplifies the fact that despite being 26-0, SDSU does not match up favorably against every team in the country. It’s worth noting that the last team to go undefeated and win the National Championship was the Indiana Hoosiers in 1976. Since then, six teams have gone to the tournament undefeated – each of them failing to cut the nets.

How Does the Aztecs’ Resume Look as we Approach March?

According to ESPN, The Aztecs currently have the best record in college basketball at 26-0, winning by an average scoring margin of 17.7. Per NCAA.com, SDSU is looking to be the first team to enter the NCAA tournament with an unblemished record since the Kentucky Wildcats did it in 2015. The last mid-major team to do this was in 2014 when the Wichita State Shockers entered the tournament at 34-0. This Shockers team would lose to the eventual runner-up Kentucky in the round of 32. The Aztecs have 3 wins over teams currently ranked in the AP top 25. This includes neutral court wins against Iowa and Creighton in the Las Vegas Invitational and an away victory against BYU. This team is widely considered to be one of the best teams in the country, showing up as a top 5 team in the AP Poll, Coaches Poll, and KenPom ratings.

SDSU has been a friendly team to bettors this season, posting the second highest win percentage ATS among college basketball teams. This includes their current five game win streak ATS. Recently, they’ve gone OVER in five of their last seven games. This includes a current two game UNDER streak.