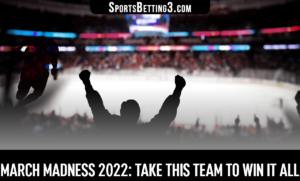 It is Mike Krzyzewski’s final season, and a couple of weeks ago, not many people would have thought that the Duke Blue Devils (+150) would be the favorite to win the 2022 NCAA Division I Men’s Basketball Tournament national championship entering Final Four weekend. Well, they are as we turn the page to April.

There has been so much hype for Duke in the 2022 tournament, so let us take a look at all the teams in the Final Four:

New Orleans will feature two very important matchups: it is No. 2 against No. 8 while the other Final Four matchup is No. 1 against No. 2. The Kansas Jayhawks (-4.5) are favored against the Justin Moore-less Villanova Wildcats, while Duke (-4.5) has the same spread against the University of North Carolina Tar Heels. The better-ranked squads have the advantage with the spread and futures: Kansas (+180) is second behind Duke (+150), with Villanova (+475), and North Carolina (+550) rounding out the Final Four.

So, which team should you be taking to win it all? Should you go with the swan song story or can lightning strike twice for the Tar Heels? Meanwhile, is it a wise decision to take Jay Wright’s squad? He is a tremendous head coach who won in both 2016 and 2018 with Villanova. We also cannot forget the Jayhawks, who are a close second in terms of odds. They have consistently looked strong, but will have a much lower-scoring game in the early contest on Saturday:

Will a higher-scoring game lead to a more predictable result for the Blue Devils and Tar Heels?

Take the Blue Devils to Win it All

The answer to that question is yes, and therefore, Duke is the best choice to cut down the nets in the NCAA tournament. In Coach K’s final season, he is looking for his sixth national championship and his first since 2015. He had nine-year championship droughts from 1992 to 2001 and from 2001 to 2010, but what Krzyzewski and company accomplished this year was miraculous.

His Blue Devils are in the Final Four for the first time since the 2015 national championship team, and he has Paolo Banchero, Wendell Moore Jr., Mark Williams, AJ Griffin, and Trevor Keels all in double figures. It remains to be seen if the three freshmen, one sophomore, and one junior are all NBA contributors very soon, but for now, they are the favorite to take home the national championship. After frustrating losses to end their regular season and their conference tournament journey, the Duke Blue Devils deserve to be the favorite to win the title.