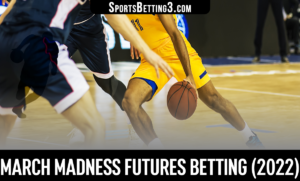 Picking out winners in March Madness is difficult enough when filling out a bracket before the start of a tournament. The time to find value in a national champion is in January and February.  As teams go through their respective conference schedules, inevitable lapses occur and teams take losses they likely shouldn’t.

In our 2022 March Madness betting guide, we will take a look at a handful of teams that can win it all and how to get the best value on them.

A number of upsets this weekend has vaulted Gonzaga back to the No. 1 spot in the Top 25. The Bulldogs, who have collected several victories over the top teams in the country, are eager to return to the finals after a disappointing loss to Baylor in the final last season. Gonzaga are currently priced as a +650 favorite to win the tournament.

The Bulldogs are led by senior forward Drew Timme, who averages 18.6 points per game, and also have freshman center Chet Holmgren, who has started to settle into NCAA play after experiencing some growing pains. With Gonzaga, it is better to wait to bet the Bulldogs to see if they lose any games in the West Coast Conference. The Bulldogs’ conference isn’t regarded highly and any loss by Gonzaga would set off panic.

Buy the dip with Baylor?

The Bears have struggled of late, losing the No. 1 ranking after dropping two home games in a week. However, Baylor isn’t a team to sleep on. The Bears are once against an excellent defensive team and have shown their mettle against some of the best teams in the country. Dominant victories over Villanova and Iowa State show Baylor has the makings of a championship team and are +700.

What makes the Bears so tough is how deep they are. James Akinjo, LJ Cryer, Adam Flagler and Kendall Brown all average in double figures score for Baylor. In additional, Baylor doesn’t take time off on defense. The Bears limit teams to 59.9 points per game, which ranks 20th best in the nation.

Pearl of a Team

Auburn is an intriguing longshot to win the NCAA title. Bruce Pearl has started to work his magic again with the Tigers, leading them to a 16-2 start and No. 2 ranking in the polls. Auburn is +2000 to win the title. The Tigers have shown they are ready for the big time in conference playing, going on the road to beat ranked Alabama.

Auburn has also collected victories over Syracuse and a ranked LSU team. What makes the Tigers so enjoyable to watch is how they attack their opponents. Forward Jabari Smith leads four players who average in double figures by scoring 16.1 points per game. Auburn pushes the pace and ranks 21st in the country in scoring by averaging 80.6 points per game.

Can Big Ten win the big one?

Purdue wants to end a long streak that’s haunted the Big Ten. The conference hasn’t seen a team win the NCAA title since Michigan State broke through and beat Florida in 2000. The Boilermakers were set up to be successful this season thanks in part to the return of Trevion Williams.

Williams, who averages 13.3 points and 8.6 points per game, has led a Purdue team that has fought through vicious competition in conference. However, the Boilermakers also collected victories in the non-conference against ranked UNC and Villanova teams. Purdue sits at +900 right now to grab the program’s first crown.

While repeat champions in the NCAA Tournament are rare, Baylor has the right makeup to win again. Look for Baylor at its current number of +700 or better.  The Bears will still have several difficult matchups left in Big 12 play before the start of March Madness. If Baylor struggles with Kansas or some of the other landmines ahead, it may be possible to pick up the Bears at a more advantageous number.