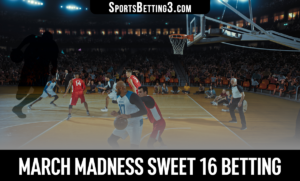 Here we are at the Sweet 16 of the 2022 NCAA Division I Men’s Basketball Tournament, and of course, we have another Cinderella: Saint Peter’s.

Now, what should we do about betting with or against the Saint Peter’s Peacocks? In addition, what should we do with the other double-digit seeds? On Thursday, the No. 11 Michigan Wolverines face No. 2 Villanova. Then on Friday, No. 15 Saint Peter’s takes on No. 3 Purdue for the early game. The latest contest will be No. 11 Iowa State and No. 10 Miami.

There have been three 10 seed vs 11 seed matchups in the Sweet 16. In all three instances, the underdog won outright and in two of the three instances, reached the Final Four – VCU in 2011 and Syracuse in 2016…

The final game of the Sweet 16 round between the Hurricanes and Cyclones should be an exciting one with Kevin Harlan on the play-by-play call of the game at the United Center in Chicago, Illinois. It appears that Izaiah Brockington, Tyrese Hunter, and the Iowa State Cyclones are the ones to go with here.

Can Michigan or Saint Peter’s Pull Off the Upset?

Juwan Howard is back and the Wolverines are better than ever, as they are back in the Sweet 16 for the fifth straight tournament:

Michigan is made for March ?#MarchMadness pic.twitter.com/5niflxmg5e

Neither Michigan nor Saint Peter’s has a great chance of winning their Sweet 16 matchups though, according to FiveThirtyEight:

The Wolverines (+188) seem to be a decent moneyline bet, unless you have a really strong indication about the Peacocks  (+600) with Daryl Banks III and KC Ndefo.

Is There a Team You Can Trust in the Sweet 16?

Of course, the easy answer to the “Who can you trust” question is top-seeded Gonzaga. The Bulldogs are +225 to win the tourney, with Kansas (+500) and Arizona (+600) rounding out the top three.

However, Arizona is taking on Houston (+1000) and the Wildcats are just 1.5-point favorites in that contest, which will finish on Thursday night at AT&T Center in San Antonio, Texas. Meanwhile, Coach K continues his final season in a toss-up Sweet 16 matchup against Texas Tech (+1600). The Blue Devils are +1500.

The Bulldogs (-9.5 vs. Arkansas) are on a mission, as they are still in search of their first national championship in school history. Their odds are not easy to bet at this time, but you can trust their moneyline (Gonzaga -450) against an Arkansas team that has won their first two 2022 NCAA tournament games by a combined nine points.