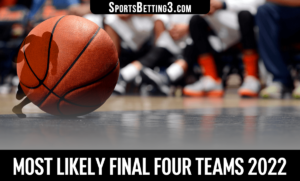 The NCAA Tournament field is quickly narrowing. What makes things exciting is that there is a nice mix of teams still remaining, from underdogs to blue bloods. Which of those teams are most likely to march on depends on their matchups.

Some teams have a nice setup on the way to a Final Four, while others will have to hope to play their best basketball to keep moving on.  For how to bet on college basketball, check out our guide.

We may be in Kansas still, Dorothy

Don’t take this next thought as a swipe at the Big 12 champion Jayhawks, who earned their No. 1 seed. No team may have benefitted more from the “madness” aspect of March Madness than Kansas. The three teams remaining in the region — fourth-seeded Providence, No. 10 Miami and No. 11 Iowa State — are all good matchups for the Jayhawks.

Kansas, which is 30-6, already beat the Cyclones twice, who are in the midst of an amazing turnaround. The Hurricanes have never made it past the Sweeet 16 before, while the Friars are generally considered one of the weaker teams to win the third round.

Kansas has a prolific offense. The Jayhawks rank 23rd nationally in field goal percentage, making 48 percent of their shots, while scoring 78.6 points per game. Ochai Agbaji leads Kansas by scoring 19.3 points per game.

While the Bruins are the fourth seed in their region, it’s hard not to like UCLA as the Final Four representative out of the region. Purdue, which is seeded third and the top seed remaining in the region, is an offensive juggernaut, but won’t be tested as thoroughly as the Bruins on their way to the Final Four.

UCLA returns all 10 rotation players from its team that made a surprising run from the play in round to the semifinals. Guard Johnny Juzang has been the engine that makes the Bruins go, leading the team in scoring at 15.7 points per game. There is some concern with UCLA regarding the injured ankle of Jamie Jaquez Jr., who is the Bruins’ second-leading scorer.

Even without Jaquez UCLA can count on guard Jules Bernard, who averages 12.7 points per game, and point guard Tyger Campbell, who averages 11.8 points and 4.7 assists per game to help carry the team.

The Bulldogs won’t be prone to lapses as the tournament gets deeper. Gonzaga overcame an immense test against Memphis and has the players to put a ton of pressure on opposing defenses. Senior forward Drew Timme has continued his excellent playing, averaging 18.2 points and 6.7 rebounds per game.

Timme is supported by 7-foot-4 freshman center Chet Holmgren, who averages 14.2 points, 9.8 rebounds and 3.7 blocks per game. Gonzaga’s offense overall has a beautiful look to it. The Bulldogs average 88.3 points per game, which is the top scoring offense in the country.

It is difficult to stop the Gonzaga attack, makes 52.4 percent of its shots. Gonzaga is also effective on defense, limiting its opponents to 37.6 percent shooting from the field.

The Wildcats won the Big East championship and are loaded with experience. Senior point guard Collin Gillespie made the most of an extra year in school, averaging 16.0 points, 3.8 rebounds and 3.4 assists per game. What makes the Wildcats so difficult to stop is they can win a game anyway you want to play it.

Villanova has a diverse offense, with four players who can score in double figures, that is the top free-throw shooting team in the college basketball history. The Wildcats shoot 82.3 percent from the charity stripe. Villanova also makes 36.6 percent of its 3-point shots, which is 49th-best nationally.

The Wildcats also have an excellent defense. Opponents find it hard to shoot from anywhere on the floor against Villanova. From the perimeter, opponents only shoot 31.9 percent. Teams only average 63.6 points per game against the Wildcats, which ranks 36th nationally.