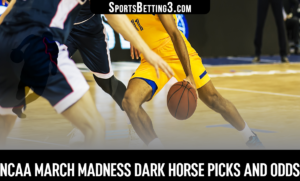 We have all seen the mid-major teams pop-up and go on an unbelievable run. These March Madness dark horse teams seemingly happen out of nowhere. However, this is not necessarily true.

We have seen teams with blue-chip recruits and talent that brought them to the finish line These teams include Gordon Hayward’s 2010 Butler team, Kemba Walker’s 2011 UConn team, and Derrick Rose’s 2008 Memphis team. While each of these teams are considered non-major “powers” in college basketball, each had important pieces to help them make a run.

When looking at a rather confusing season, we look back on the past as most tournaments have featured a mid-major run. Now, mid-major schools do not mean underdog necessarily. After all, Gonzaga – the top-ranked team with a 20-0 record – is considered mid-major.

Here we will find the dark horse picks. Teams that can make that run that other people might be sleeping on.

Odds are not yet fully available by I would love to take any of these teams to make the Final Four. Most years include mid-major teams in the Final Four.

Mid-majors are lethal this year and none more so than Loyola Chicago. No major programs want a matchup against Loyola Chicago. The Ramblers have a tough loss to #11 Wisconsin and Richmond (more on them later.

The Ramblers have beaten plenty of strong teams such as Drake, Bradley, and should have quite the win streak walking into their conference championship. Expect Loyola Chicago to be a dangerous team when the tournament rolls around.

The Aztecs have work to do and I think we all know that. However, I believe their upside is as high as any team we have seen in college basketball this year. San Diego has wins over #21 UCLA and #23 Arizona State. These phenomenal wins over major teams are followed up by two horrible losses to Utah State.

The Aztecs are 15-4 and need to show up big time if and when the tournament comes their way. They currently projected to be a No. 9 seed. The projection shows them lower than Missouri, Kansas, and Florida State – each of which I believe that SDSU can beat.

Atlantic 10 Conference stand-up! The Billikens have had a bunch of games postponed due to COVID-19 so this is going to be very interesting as we get closer to Selection Sunday. They have two losses during their postponements. They lost to Dayton and La Salle during the heat of their postponements.

Saint Louis will have the opportunity to right that wrong against Dayton on Friday. Should they complete that feat, I believe it would show a lot about their prowess. They also have a battle against Richmond setup (COVID permitting) so they could be ranked if they win out.

This one is very COVID-19 permitting. Richmond has had a ton of postponements due to COVID and they have not stopped at all. Their most recent game against Fordham was postponed and there is no information about their game Saturday @ La Salle.

Taking all of that into account, Richmond has some fantastic wins on their resume. They have victories over Kentucky, Loyola Chicago, and played West Virginia pretty tough. Richmond’s great wins show their toughness ability to compete with top teams. Richmond might need to beat Saint Louis in a few weeks just to have a chance to make the tournament. Should they sneak in, Richmond will not be someone that teams want to face.