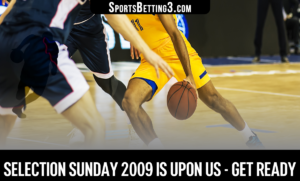 Watch out, here she comes – It’s selection Sunday, the preamble to the annual March Mania betting season that comes with the NCAA Div 1 Men’s Basketball Tournament. This fast and furious time of year is second only to the Super Bowl in terms of intensity, but is very popular among bettors looking to get a magical perfect bracket. Take heart, the odds of getting a perfect bracket are next to nil, but still, betting on a few games is fun.

Without a doubt, Selection Sunday and the NCAA committee don’t always come out on top with fans: In fact, many people angrily go into March Mania with a chip on their shoulders after finding out that their favorite team was “on the bubble”, but ultimately nixed from the tournament. Well, these things happen, but you can still make money on the games…

When the brackets are set to go, and the tournament schedule is finalized, we’re sure you’ll be in a good mood to move forward with the rest of the crowd.

Action starts March 17, 2009, when the ball is tossed in the air for the first time. From that point forward, it’s anyone’s guess what happens for the rest of the 63 remaining games. Have and and enjoy: March Mania Betting 2009