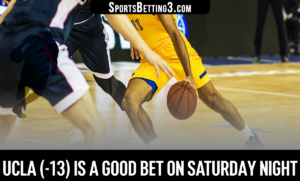 As winners of their last five, the No. 7 UCLA Bruins (15-2, 7-1) are looking primed for another Final Four run in 2022. Mick Cronin’s squad, the 10th best team in the nation according to Ken Pomeroy, has been led by Johnny Juzang and his 18 points per game. However, Juzang who is in COVID-19 protocols, may not play on Saturday night after missing Thursday’s contest. The Stanford Cardinal (12-6, 5-3) is the heavy underdog for this primetime Pac-12 matchup even after upsetting the No. 15 USC Trojans on the road on Thursday.

Just four home games are remaining for the Bruins, including this January 29 matchup between UCLA and Stanford. The game is the first of two meetings, and the second of which will be a contest at Maples Pavilion. In their only meeting last year, Juzang scored a game-high 27 points, but Stanford defeated No. 24 UCLA, 73-72, on an overtime buzzer-beater at Maples Pavilion.

The Bruins’ only home loss this season came when there were only 119 people in attendance at Pauley Pavilion. UCLA dropped January 13’s contest to the Oregon Ducks, 84-81, as Dana Altman’s squad appeared to be hitting its stride. Cronin’s team has put that loss in the rearview mirror, with home victories against Oregon State, No. 3 Arizona, and California.

Can the Cardinal make this contest a close game against the Bruins? It does not seem so because the Bruins have won three straight home games by double digits and they have covered each of their last three games.

How the Bruins will Cover the Spread

Since fans have returned to Pauley Pavilion, UCLA has outscored opponents, 156-116. Even without Juzang, the Bruins defeated the California Golden Bears by 24 points on Thursday.

This game is the perfect time for revenge for a UCLA team that went from the First Four to the Final Four in the 2021 NCAA Tournament. Last year, the No. 11 seed Bruins took down a No. 2 and No. 1 seed en route to the Final Four, but they fell to the Gonzaga Bulldogs. Gonzaga is responsible for UCLA’s only other loss this season.

The Bruins have a very strong chance of winning this contest (-1200). With a 13-point spread, it may not seem easy for the Bruins to cover, but they make up one of the best teams in the nation. Jules Bernard, Jaime Jaquez, and Tyger Campbell are all significant contributors, and they can make up for Juzang’s absence. There is a chance the odds will improve if Juzang is pronounced out for this game, so keep a lookout for the spread to move close to 10 or 11 points.