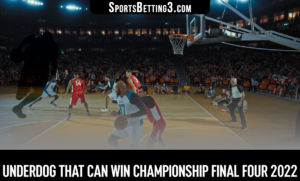 UNC thought it had put the final nail in the coffin of the Tar Heels’ rivalry with legendary Duke coach Mike Kryzezwski on March 5, 2022. Playing on the road at Cameron Indoor Stadium, the Tar Heels smashed the Blue Devils 94-81 in Coach K’s final home game.

But fate has brought the two together again. Duke and UNC both made the Final Four and will play each other Saturday in New Orleans. The Tar Heels, who have been blistering hot since for the past month, have the longest odds to win the NCAA Championship.

However, UNC there is value on the Tar Heels +525. For more on how to bet college basketball, check out our betting guide. Here’s some reasons UNC is worth a look to win its seventh NCAA Championship.

UNC’s offensive attack is difficult to slow down because of how diverse the Tar Heels are. Forward Armando Bacot is a double-double machine, averaging 16.5 rebounds and 12.8 points per game. Fellow forward Brady Manek also contributes 15.2 points and 5.9 rebounds per game.

Guard Caleb Love has provided energy from his spot as well. Love has averaged 18.0 points per game during the tournament, including two games where he shot 46.2 percent from the 3-point line. Against UCLA and Marquette, Love knocked down six treys.

The Tar Heels, who are now 28-9, were lightly regarded at one point this season. In the non-conference schedule, UNC took losses to Purdue, Tennessee and Kentucky. Against the Volunteers and Wildcats, UNC took double-digit losses.

Following a lackluster start to Atlantic Coast Conference play, there was a chance the Tar Heels were in danger of falling out of the NCAA Tournament picture. UNC lost three early conference games on the road to Notre Dame, Miami and Wake Forest. Following the loss to the Demon Deacons, the Tar Heels sat at 12-6 overall and 4-3 in conference.

One of the more surprising results — both for Pitt and UNC — was what happened in the Dean Dome on Feb. 16.  The Tar Heels gave up 40 points in the first half to offensively-deficient Pitt on the way to a 40-23 loss. The Panthers finished the season 11-16 and their only other win over a team that made the NCAA Tournament was a win over Colgate.

UNC would respond with six straight wins. Pitt fell apart after beating the Tar Heels, losing their final five games, the final four of those by 20 points or more.

UNC’s easiest test in the tournament may have been its Elite 8 victory over Cinderella story Saint Peter’s. To reach the Elite 8, the Tar Heels knocked off the defending national champion Baylor in overtime in the second round before knocking out Final Four participant UCLA in the Sweet 16.

UNC plays a fun, up-tempo brand of basketball and has been one of the hottest teams in the nation. The Tar Heels have won 10 of their past 11 games and have been scoring at a breakneck pace.

Villanova, which is the team with the second-longest odds to win, suffered a major loss in the Elite 8. The Wildcats had guard Justin Moore tear his ACL. Already saddled with a tough matchup with the last remaining No. 1 seed Kansas, losing Moore will hurt the Wildcats’ offense.

Moore averages 14.8 points, 4.8 rebounds and 2.3 assists per game. Villanova won’t be totally lost without him, but it’s hard to see them winning two more games. Bet on UNC at +525 to upset Coach K again, then knock off Kansas to win the championship.