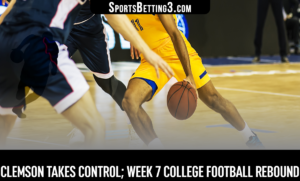 The favorites to win the National Championship separated themselves even further last week. The Clemson Tigers squared up with the Miami Hurricanes and absolutely bludgeoned them. Somehow, the Miami Hurricanes had more penalties than yards on Saturday. Clemson showed up disciplined and ready to dominate like usual. College Football Week 7 is upon us and there is an extremely juicy opportunity.

Miami is not a team that we could possibly just give up on, right? Clemson is a phenomenal roster and the Hurricanes just weren’t ready for it yet. Miami came into last week as 14 point underdogs and they did not cover that spread. The game was not close and the total did go under.

The rebound is forthcoming below, tail at your own risk.

Miami is getting a ton of respect from Vegas in this one. They are 9.5 favorites against a sneaky good Pittsburgh team. The Panthers have lost two straight and only by a combined 2 points. The Miami Hurricanes should not be 9.5 point favorites in the ACC matchup.

This is however a rebound, “no one believes in us” game. Miami should come back against Pittsburgh angry and ready to compete. 9.5 is a bit too much for my blood and rightfully so. They looked so bad on offense that they cannot be trusted to cover a two-score game versus Pittsburgh.

You will have a hard time finding a team that has struggled more in its totality than the Louisville Cardinals. They are 1-3 this season and one of the worst defensive teams we have seen this season. Conversely, Notre Dame is 4th in the country in rushing offense. This spells bad news for Louisville who cannot possibly keep up with this.

Notre Dame is eighth in College Football in yards per play. They are the fourth-ranked team in the country thanks to Florida dropping to Texas A&M. Notre Dame will roll Louisville en route to an easy victory. You could do worse than take the under here as well but I’ll stay away. Believe in the Fighting Irish!