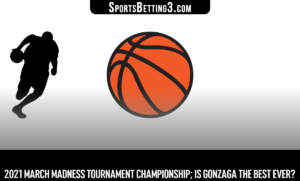 The March Madness Tournament is about to come to a conclusion and it is has been a riveting time. We have seen some frantic play resulting in crazy upsets. Somehow, we saw UCLA upset Michigan State in the play-in game and now they are in the Final Four.

Unfortunately for UCLA, they are running into the buzzsaw that is Gonzaga. Gonzaga has not had a truly difficult challenge yet this tournament. It is unclear if they ever will be tested. However, I believe that there is still hope to be had for the most anticipated NCAA Championship game in years.

Back The Bears As Tournament Champions

Consensus odds have Baylor still around +225 to win the tournament. Gonzaga is a massive favorite over -250 which I think is completely ridiculous. If and when Baylor and Gonzaga meet to play each other, I project Gonzaga to be a -225 favorite in the championship game. Obviously, if Baylor were to lose to Houston, Gonzaga would be a much bigger favorite.

Baylor has some of the strongest three-point shooting college basketball and plenty more to boot. They bring in some strong defensive tendencies that make it difficult for the opponent to score. Baylor is far more battle-tested at this point than Gonzaga – although Gonzaga has been extremely dominant.

I think Baylor having won every game besides the Arkansas game by double digits says a lot about how great they have really been. Regardless, Baylor +230 to win the tournament is excellent odds and should end up being fairly hedge-able at some point on Monday. I would bet this down to +210 at a 2% edge.

I think all of the value here is on Drew Timme the Gonzaga star. +175 for their best player is a bargain and if Gonzaga does win, he is the most likely winner. If you are looking for a Gonzaga title bet, Drew Timme is the play for March Madness Most Outstanding Player Award.