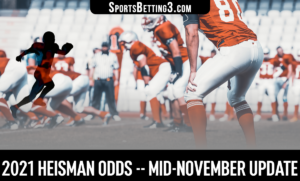 The 2021 Heisman race has become much clearer as we near the end of college football’s regular season.

Among the favorites, each still has two (mostly) big-time games against rivals and/or conference title games ahead, allowing plenty of opportunities for each to still make their case. Here’s our latest look at the 2021 Heisman odds race and where the best betting value may lie.

Of the other quarterback Heisman contenders, Young leads them all in completion percentage (70.9%), touchdown passes (33), and QB rating (180.13). The sophomore hasn’t thrown an interception since early October and has topped 300+ yards passing in four of Alabama’s last five games (and in the one he didn’t he still threw five touchdowns anyway).

If you’re leaning Young, it’s worth noting that the Tide face some stiffer competition to close out the season against Arkansas (a Top 25 passing defense) on Nov. 20, at rivals Auburn on Nov. 27, and (likely) in the SEC Championship against No. 1 Georgia on Dec. 4. Any of these games could either put a strong coda on his Heisman case or stifle his numbers in favor of another candidate.

Depending on where you look, you may find Stroud to have better odds than Young–the two have seemingly been trading the top spot week to week. The reason why is clear—Stroud has thrown at least four touchdowns in more games than he hasn’t and is averaging a first down nearly every time he throws the ball with 9.8 yards/att–good enough for fifth in the nation.

Like Young, Stroud has three* marquee games remaining that could make or break his Heisman hopes–against Michigan St., at Michigan, and likely the *Big Ten Championship game. Fortunately for Young, the Spartans have the worst pass defense in FBS which could provide an opportunity for him to pad his stats enough to become the favorite and the first freshman to win the Heisman since Jameis Winston in 2013.

Walker’s season has had its ups and downs, but the ups have been big enough to make his Heisman odds chart look like a stock you wish bought at the IPO. Although he’s dropped a few duds–less than 4.0 YPC and 0 TDs against both Indiana and Nebraska–his five TD, 197-yard day against Michigan more than made up for it, as does being #1 in the nation in yards per game and touchdowns (tied).

To remain in consideration for the sport’s top prize however, he’ll need to put together a similar performance this Saturday against Ohio State’s top-20 rushing defense. If he can, he’ll have one more great opportunity against a softer Penn State the final week of the season to make his case to voters.

What’s most interesting about Matt Corral’s campaign for the sport’s top individual prize is that he actually had a better season last year but didn’t any receive Heisman votes. That momentum however has turned the redshirt junior into a Heisman finalist and what many project as a top 10 pick in next year’s NFL Draft.

While he likely won’t match the 29 TDs he tossed last season, he has thrown the fewest interceptions (2) of any SEC starting quarterback and is on pace to surpass the 3,337 yards he threw for. He’ll also get to close out the regular season against two of the conference’s worst pass defenses in Vandy and Mississippi State.

There was a brief period of time when Kenny Pickett’s Heisman odds rose to +950 and he and his Pitt Panthers looked unstoppable. Despite not having a truly bad game (unless you count the 2 INTs in the loss to Miami…in which he still threw for 500+ yards), public favor seems to have cooled on the redshirt senior and his odds have dropped to +2500.

He would need the favorites above to have some clunkers to close out the season, but with tilts against Syracuse and Virginia upcoming (plus a potential ACC Championship appearance, likely against Wake), a Pickett charge the Heisman isn’t entirely impossible. That said, as of now he looks to be the only viable candidate outside the current top four favorites in the 2021 Heisman odds.