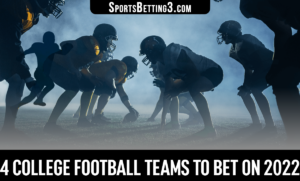 A new college football year is upon us and the University of Georgia hopes to defend its title. Kirby Smart led his Bulldogs to a 14-1 season behind senior quarterback Stetson Bennett’s stellar performance. James Cook, Brock Bowers, and Zamir White all gained at least 900 yards from scrimmage en route to the school’s 2022 College Football Playoff National Championship.

With Bennett having one more year of eligibility, can Georgia (+400) repeat as champions? The Bulldogs will have to fight with SEC rival Alabama (+150), the national champion runner-up last season. The Crimson Tide — the title favorites — made significant additions in the backfield and will look to get over the hump with Heisman Trophy winner Bryce Young back under center.

Neither Georgia nor Alabama will not have it easy this season, as the Ohio State Buckeyes (+250) are a strong bet for their first national championship since 2014. The 2021 Buckeyes missed the College Football Playoff as a result of a big loss to the Michigan Wolverines.

So, which college football teams should you be betting on?

After an 8-4 season in 2021, the Aggies are ready to bounce back. Most likely it will be Haynes King or LSU transfer Max Johnson at the quarterback position unless freshman Conner Weigman shows that he is ready for stardom in college football’s best conference. Jimbo Fisher hopes to improve the Aggies this time around.

Jim Harbaugh reached the Orange Bowl in 2021, but it, unfortunately, ended with a loss. The 12-2 season was by far his best with the Wolverines, and if the 2022 season looks anything like last year did, then Michigan is a team that should be considered a contender. We will see who ends up starting at quarterback. It will be either redshirt junior Cade McNamara or sophomore J.J. McCarthy.

Like the Wolverines, the Fighting Irish had a strong 2021 season, finishing with just two losses. They also lost in their bowl game, but it was by a closer margin. Can Notre Dame take the next step in 2022? Marcus Freeman started his career as head coach with the Fiesta Bowl loss, but he can prove it on the road in 2022 against the likes of Ohio State and USC.

The Utes had an impressive 8-1 conference record last year as a part of a 10-4 season. They did drop their bowl game last year though: a 48-45 loss in the Rose Bowl against Ohio State. Utah carries strong value in 2022 after the team brought in Florida transfer linebacker Mohamoud Diabate. We will see if quarterback Cameron Rising can continue his ascension.