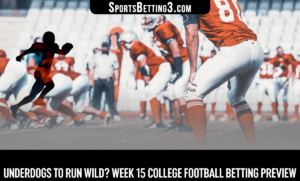 The Week 15 College Football slate took a major hit when the Ohio State vs. Michigan game was canceled. Michigan certainly was lucky to not have to play the game. Jim Harbaugh has looked overmatched this season and rumors are heating up that he will not be back.

There are plenty of games to look forward to in week 15 however. Below we will find a plus money bet that sharp bettors love and a beautiful over/under. Assuredly, we will parlay these two in order to really make the juice worth the squeeze.

While COVID-19 has been generally well dealt with in college football, the Houston Cougars have certainly gotten the short end of the stick. Houston has been forced to sit for the last month prior to this game. Returning to action right now going to be a tough task as they face the Memphis Tigers.

This line originally opened up at Houston -2.5 but I believe that this is too high. Houston has not played in a month and are notoriously slow starters. Memphis does not start off slow in any way. They put up points and they do it in a hurry. The best bet could be the over and no one would fault the bettor for taking it.

Expect the Memphis Tigers to come out of the gate firing and putting up big points. 5 point favorites is such a high number, I actually believe that Memphis could be favored in this game. Moneyline is a fantastic bet and is my best bet of the week. Go Tigers!

Kyle Trask and the Florida Gators are continuing to push their way to be in the college football playoff. They are massive favorites against the LSU Tigers and should win this game with ease. The value here is going to be in the total points sector.

The LSU Tigers have been constantly humiliated but none more so than last week. The LSU defense is an absolute dumpster fire that cannot make big plays. Furthermore, they give up big plays in chunks, leading to difficult games to come back from.

LSU might attempt to play harder and make a stand on defense. However, the Florida Gators are going to want to embarrass LSU just as much as Alabama did. I would expect huge points from Florida as they try to make their statement for a spot in the playoffs.

Parlay Bet Of The Week