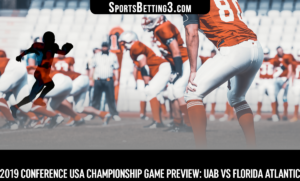 Florida Atlantic started the season 0-2 after falling two current #1 Ohio State 45-21 and a then ranked #18 UCF 48-14. Since then, then, the only loss for Florida Atlantic came against Marshall 36-31. The Buckeyes and Knights are elite teams in the country that a team like Florida Atlantic has to be content to compete with, even though they aren’t expected to beat teams like that. Take away those two games and the Owls are averaging 37.4 points per game.

Throughout the entire season, the Owls are still averaging more than 34 points per game, good for 27th-best in the country. The Owls are a pass-first team (31st) but also have a balanced rushing attack (69th). They aren’t a very big-play offense as they rank 71st in that category but they do well at marching down the field and keeping the opposing defense on the field (18th in number of offensive plays ran).

For the Blazers, their offense is not their strength. Between two games this season against Tennessee and Southern Miss, the Blazers scored just a total of nine points. It is worth noting that UAB was without starting quarterback Tyler Johnston in their 37-2 defeat to Southern Miss. Johnston is expected to be available for the Blazers in this game after attempting just one pass since being injured in the fourth quarter against Tennessee back on November 2nd.

UAB’s offense ranks just 95th in total points scored per game (25.08). They do better on the ground (66th) than they do through the air (93rd). UAB likes to control the tempo of the game by slowing down the pace and keeping their opposing defense on the field. The Blazers are 22nd in time on the field on offense despite being 116th in the number of plays run per game. Like FAU, UAB is not a very big-play offense as they rank 79th in yards per play.

Florida Atlantic’s strength is their offense but their defense is nothing to sleep on. The Owls have held three opponents this season to single-digit points. FAU is 44th in points allowed per game this season. They have struggled against the pass this season (96th) but some of that can be attributed to having played the Buckeyes and Knights in their first two games of the season as they are two of the best offenses in the country. The Owls are solid against the rush this season as they rank 38th in the country, allowing 136.5 yards per game on the ground.

The defense has been the key to the Blazers’ success this season. Since their loss to Southern Miss, the Blazers held opponents to an average of just 15 points per game. All of this was done without their starting quarterback on the other side of the ball, which put more pressure on this defense to step up. The Blazers held five of their opponents to 14 points or fewer this season. UAB ranks 15th in points allowed per game. They are solid at stopping both the run (5th) and the pass (6th). They don’t spend a lot of time on the field (24th) and they do not allow a lot of big plays (5th in yards per play allowed).

Currently, the Owls sit at a 7.5-point favorite. The total is set at 49.5. Both of those numbers are 0.5 points above key numbers. A seven-point spread is a key number due to the fact that it is the number of points for a touchdown (and XP) and 49 is a key number for a total because it is equivalent to seven touchdowns (and 7 XPs). Neither team is a big-play offensive team and they both have solid defenses. The Blazers certainly need a low-scoring game if they want to pull the upset while the Owls will be content with a high-scoring shootout. Having their quarterback back will be a big boost for the Blazers offense.