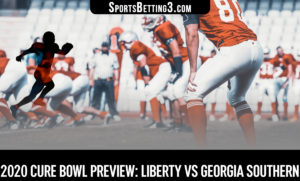 College bowl season is finally here. This Saturday features six bowl games and one of the more interesting ones will be the Cure Bowl as the Liberty Flames (7-5) take on the Georgia Southern Eagles (7-5). For Liberty, this will be their first bowl game appearance in their first year of eligibility after their transition from FCS to FBS. For Georgia Southern, this will be just their third bowl appearance in program history.

The strength of the Liberty offense is certainly their passing attack. The Flames are 32nd in points scored per game and a big reason for that is their 21st-ranked passing offense. Liberty is led by Senior quarterback Stephen Calvert, their all-time passing yards leader (11,775). The Flames have an average run game that ranks 74th in the country to go along with their heavy passing attack. The Flames are a big-play offense that ranks 17th in yards per play in the country. Liberty scored 49 or more points in four of their games this season.

As good as the offensive numbers have been for the Flames this season, they struggled to put up points against their toughest competition this season. In their season opener, the Flames were shutout against Syracuse 24-0. The following week against the Ragin’ Cajuns, Liberty scored just 14 points. Liberty had two other games this season where they scored 20 or fewer points, although both were wins. Against BYU and Virginia, both losses in November, the Flames scored a combined 51 points.

Georgia Southern’s offense is the complete opposite of that of the Flames. The Eagles are a ground and pound team that thrives on running the ball. Georgia Southern runs the triple-option offense which has them as the eighth-best rushing team in the country at 261.5 rushing yards per game. Junior quarterback Shai Werts averages just above 70 yards per game through the air and less than 11 attempts per game, putting the Eagles as one of the five worst passing teams in the country.

The Eagles triple-option offense didn’t fool LSU in their season opener. The Eagles offense had just 98 total yards in a 55-3 blowout. However, the Eagles managed to give now #18 Minnesota a run for their money in a close game that they ended up losing by just three points. Despite losing the game 35-32, the Eagles offense still managed just 198 total yards and two turnovers. The Eagles closed out their regular season strong as they averaged 37.5 points per game since the start of November.

The Liberty defense started the year out fairly strong, allowing just 21 points per game through their first six games of the season. Since then, the Flames have allowed more than 37 points per game over their final six games. On the year, the Flames are about average in points allowed per game, 77th, and against the pass, 74th. Liberty has had some trouble stopping the run as they are 99th in the country, something that could be an issue against the Georgia Southern rush attack.

Georgia Southern’s defense is in the same situation as the Flames’ defense, they struggle against their opponents strength. As the Flames have struggled this year against the run, the Eagles have struggled against the pass. Georgia Southern is 72nd in points allowed per game. They are 41st and stopping the run but 91st against the pass. The Eagles do well to get off of the field quickly on defense as they spend the 12th-fewest amount of time on the field. Four times this season the Eagles allowed 20 or fewer points. However, they also have had five games where they have allowed 35 or more points.

You can find the spread on this game around 4.5 points in favor of Georgia Southern with a high total of 58.5. Both offenses appear to matchup well against the opposing defense. Liberty should have a big day through the air and the Eagles should do well on the ground. The winner of this game will probably be whichever team can force the most turnovers on defense. Liberty will need to find a way to stop the triple-option while Georgia Southern will need to work on stopping Calvert and the Flames’ heavy passing attack.