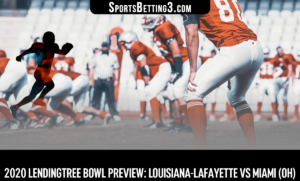 It’s the final bowl game of the season before the College Football Playoff finals on January 13th. The Louisiana-Lafayette Ragin’ Cajuns (10-3) take on the Miami (OH) RedHawks (8-5) in the LendingTree Bowl. The MAC champion RedHawks are making their first bowl appearance since 2016. The Ragin’ Cajuns, Sun Belt Conference runners-up, will be making their second consecutive bowl appearance after winning a school record 10 games this season.

The Miami (OH) offense isn’t as explosive as their opponents. The RedHawks were just 97th in the country in points scored per game this season. It is actually surprising they even scored that well as they were 114th in passing and 103rd in rushing. Add in the fact that they ran the sixth-fewest offensive plays this season and averaged just 4.96 yards per play (117th) and you can see why the RedHawks had a hard time scoring points.

Only three times all season did Miami (OH) score 30 or more points. They scored a season-high 48 against Tennessee Tech, 34 against Buffalo and 44 against Bowling Green. All of those games were at home. Take out those three games and Miami averaged just 19.5 points per game.

UL-Lafayette’s defense has been really solid this season as well. They were 21st in the country in points allowed and they were excellent at stopping the pass (17th). However, their rush defense wasn’t the best (85th). The Ragin’ Cajuns held four opponents to single-digit points this season, including three of their last six.

The defense for Miami (OH) is the strength of this team, and it really isn’t that much of a strength. The RedHawks were 71st in the country in points allowed per game. They were okay at stopping the pass (35th) but struggled to stop opponents on the ground (80th). Miami (OH) did well to limit offenses on a yards per play basis, allowing just 5.18 per play, good for 31st in the country. Aside from their 44-3 blowout of Bowling Green, Miami (OH) allowed at least 16 points in every other game, including five where they allowed 35 or more.

This game will be played in Mobile, Alabama. That gives a huge geographical advantage to the Ragin’ Cajuns. Mix that in with how dominant their offense is and how good their defense played this season and you will understand the large spread. The Ragin’ Cajuns are sitting at a 14-point favorite at most books. The total is a fairly average 55 considering this is a bowl game. The RedHawks defense will have a hard time stopping the Ragin’ Cajun offense. If Miami (OH) is going to find a way to win this game, they will need to play their best game of the season on both sides of the ball. Even getting a two-touchdown cover seems like a tall task for this mediocre Redhawks’ team.