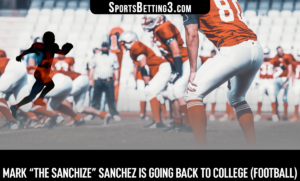 Following a 10-year roller-coaster of a career, former USC quarterback, Mark Sanchez, has officially retired from the NFL.

Alongside the news of Sanchez’s retirement came the announcement that he’d be joining ESPN as a college football analyst. Sanchez’s role includes studio broadcasts every Saturday and guest appearances on College Football Live and Get Up!

In a statement regarding the addition of Sanchez to their broadcast team, ESPN Senior Vice President of Production Lee Fitting said:

“Mark will be making an immediate transition from the field to the studio, allowing him to provide viewers a perspective that is in-concert with the current game. Succeeding within a high-pressure media market at USC, and then in the NFL, provided on-the-job training for the next chapter of Mark’s career, which we are thrilled will be with us at ESPN.”

Sanchez also took to Twitter to thank ESPN and express his excitement for the opportunity.

From 1st Round Pick, to “The Sanchize,” to “Butt Fumble”

Sanchez’s success as a college quarterback is undoubtedly his greatest qualification for his position as analyst. In his 3 seasons with the USC Trojans, from 2005 to 2008, Sanchez maintained an average QBR of 153.9. During that time, he threw for 3,965 yards, 41 touchdowns and 16 interceptions. In 2008, Sanchez posted a career best 164.6 QBR, with 3,207 yards, 34 touchdowns, and 10 interceptions. He also led his team to a No.3 AP ranking and Rose Bowl victory over Penn State (in which he was awarded Rose Bowl MVP).

Following the 2008 season, Sanchez was drafted 5thoverall by the New York Jets. After a rough rookie debut, Sanchez quickly found his footing, leading the Jets to 2 AFC Championship games in his first 5 seasons. His prolific play earned him the nickname “The Sanchize” among national media and fans.

Unfortunately, Sanchez’s NFL success proved to be short lived. He quickly became defined by another nickname. That of his infamous 2012 Thanksgiving Day “butt fumble” play, which resulted in an embarassing turnover and touchdown. Following the butt fumble, “The Sanchize” was no more.

As the 32-year-old veteran transitions off the field and into the broadcast booth, he’ll once again look to redefine himself and shed his career-defining nicknames. Catch him on ESPN for his broadcasting debut when the 2019 season begins on August 24, 2019.