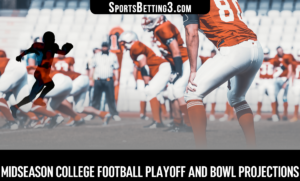 The first College Football Playoff rankings are three weeks away, but that won’t stop us from dreaming a few dreams.

As the season nears its midway point, there have been some surprises, most notably Ohio State being unbeaten and looking impressive while doing so. There also has been some normalcy with last season’s CFP finalists Clemson and Alabama also still undefeated. Can they sustain their momentum through their conference title games, or is there an upstart waiting in the wings to bring some much-needed new life into college football’s four-team playoff?

Let’s gaze into the crystal ball and see what we shall see.

No. 1 Ohio State (6-0) vs. No. 4 Clemson (5-0). The Buckeyes make their return to the College Football Playoff after a two-year absence following their rampage through the Big Ten. Ohio State will heap more misery on Michigan coach Jim Harbaugh and thrash Wisconsin for a second time in the conference title game after the Badgers emerge from the West despite losing in Columbus in late October.

The drama, though, comes when first-year coach Ryan Day uses his status as the top seed to play in the Fiesta Bowl in Arizona opposed to giving the Tigers fan base a virtual home game in Atlanta with the Peach Bowl. Justin Fields is a Heisman Trophy finalist but does not win the award after the Buckeyes run the table and enter this contest unbeaten opposite a Clemson team that will carry a 28-game winning streak into this contest, though not without some challenges before the ACC title game as Wake Forest gives the Tigers all they can handle in an Atlantic Division showdown.

No. 2 Oklahoma (5-0) vs. No. 3 Alabama (5-0). The Peach Bowl gets one of the all-time best bowl matchups, let alone CFP semifinals, as quarterback Jalen Hurts faces his old team. Hurts helps Oklahoma pull off an unprecedented three-year run of Heisman Trophy winners as he follows the path blazed by Baker Mayfield and Kyler Murray as the Sooners pile up points and yards in video game proportions while laying waste to the Big 12.

The Crimson Tide will emerge from the SEC bloodied — having absorbed a shock loss at Auburn in the Iron Bowl — but they will win the West Division by virtue of having beaten LSU, which will have beaten Auburn. It will be the same old, same old in the SEC title game as Nick Saban again gets the better of former assistant Kirby Smart and Georgia, prompting another offseason of woe in Athens.

In the semifinal run-up, Saban will rail against the media for having to answer questions about Hurts leaving for Oklahoma as opposed to talking about his quarterback Tua Tagovailoa, the Heisman runner-up.

Wisconsin (5-0) vs. Oregon (4-1). While not serving as a CFP semifinal, the Rose Bowl will pit a Big Ten team versus a Pac-12 team. The Badgers get the nod as the conference runners-up following their loss to Ohio State in the title game, making their first Rose Bowl appearance since 2013. The Ducks — who will beat Utah in their title game — will be in Pasadena for the first time since knocking off Florida State in the 2015 CFP semifinals.

This game will feature the other two Heisman finalists in Wisconsin running back Jonathan Taylor and Oregon quarterback Justin Herbert.

LSU (5-0) vs. Boise State (5-0). The wild-card bowl of the New Year’s Day Six, the Cotton Bowl gets two burgeoning stars in freshman quarterbacks Boise State’s Hank Bachmeier and LSU’s Joe Burrow. The Broncos are sent to Dallas as a reward for an unbeaten season, while the one-loss Tigers look to ease the sting of finishing second to Alabama in the West Division of the SEC.

Texas (5-0) vs. Georgia (5-0). The Sugar Bowl will be the “Consolation Bowl” for the second straight year as title-game losers Texas and Georgia meet. The Longhorns will be a two-loss team — with both defeats coming to Oklahoma in the Red River Shootout and Big 12 final — while the Bulldogs must again trek to New Orleans following a loss to Alabama in the SEC Championship.

Notre Dame (4-1) vs. Wake Forest (5-0). With Clemson in the CFP, Wake Forest takes the ACC’s spot in Miami as the next highest-ranked team. The Orange Bowl lucks out to a degree with Notre Dame since the Irish did not play the Demon Deacons as one of their five ACC opponents and have yet to use one of their two allotted appearances in this game as part of the most recent agreement signed in 2014.