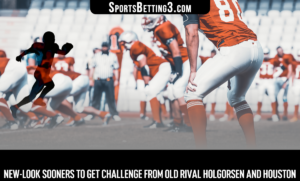 For all the points and yards Oklahoma piled up last season, it mattered little because of their porous defense.

The fourth-ranked Sooners have another Heisman Trophy worthy quarterback in Jalen Hurts, but unless its defense gels under new coordinator Alex Grinch starting with Sunday’s opener versus Houston, the national title may still be out of reach.

Oklahoma’s offense, which led the FBS in scoring (48.4 ppg) and total yards (570.3) should continue to hum with Hurts under center following his arrival from Alabama. He has big shoes to fill as predecessors Blake Mayfield and Kyler Murray were both Heisman Trophy winners and No. 1 overall picks in the NFL Draft each of the last two seasons.

Murray got the Sooners to the College Football Playoff semifinals last year, losing 45-34 to Hurts and the Crimson Tide. Oklahoma’s new quarterback was mainly a spectator in that game as he participated in three plays.

Hurts, though, created a substantial pedigree at Alabama. He helped the Tide to a national title in 2018 and compiled a 26-2 record as starter, throwing for 5,626 yards and 48 touchdowns while rushing for another 1,976 yards. His dual-threat abilities should dovetail nicely with Sooners coach Lincoln Riley’s high-octane offense, and Hurts will be helped with the presence of 1,000-yard rusher Kennedy Brooks and 1,000-yard receiver CeeDee Lamb.

Yet all this firepower will mean little if Oklahoma cannot improve a defense that finished 114th among FBS teams in total defense — the lowest mark in school history — among the bottom 10 in takeaways (11), and last among 129 schools in passing defense at 294.0 yards per game while getting torched for 28 touchdowns through the air.

That is where Grinch enters the picture. The 39-year-old arrived in Norman highly regarded after previous stops at Washington State and Ohio State working under Mike Leach and Urban Meyer, respectively. The Buckeyes were in the middle of the pack in yards allowed but gave up only 16 passing touchdowns and recorded 11 interceptions.

After eight seasons with West Virginia, coach Dana Holgorsen made a surprising jump to Houston, where he signed a five-year, $20 million contract. That made him the highest-paid coach in the Group of 5 schools as he took over a program he served as offensive coordinator in 2008-09.

Holgorsen is well-versed in playing the Sooners after seven seasons of Big 12 matchups, but beating them proved elusive. His West Virginia teams lost all seven games despite averaging 32.6 points because they gave up 47 per contest. That includes a 59-56 defeat last year in which the teams combined for 903 passing yards and 1,382 overall.

The new Cougars coach will again try to outscore the Sooners since the key pieces of an offense that ranked fifth in scoring (43.9 ppg) and seventh in total yards (512.5) return. D’Eriq King threw for 2,982 yards and 36 TDs while running for another 14 scores and is joined by 1,000-yard receiver Marquez Stevenson and running back Patrick Carr.

Houston also has a new defensive coordinator as Joe Cauthen arrives from Arkansas State, which finished 11th in passing defense and 45th in total defense last season. Cauthen will be using a 4-2-5 alignment to help firm up a Cougars defense that allowed 37.2 points per game despite having the ninth overall pick in this spring’s NFL Draft in end Ed Oliver.