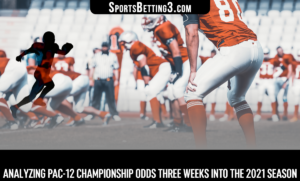 The Pac-12 can be difficult to watch due to its late kickoffs (for East Coasters) and hard-to-find TV network, but sometimes the best betting value can be found in the conferences you watch the least.

Check out our college football tutorial

Here’s how we break down the Pac-12 championship odds a quarter of the way into the 2021 season.

Easy Bucks With the Ducks?

Oregon is the only program without a true misstep thus far (we’re not counting the opener against Fresno St.—ask UCLA about the Bulldogs). They also own the conference’s best win with their defeat of Ohio State in Columbus.

Although their three toughest remaining games (UCLA, Washington, and Utah) are all on the road, the Ducks do dodge USC and Arizona St. on the regular season slate. But if the first three weeks are any indication, the North division title and the Pac-12 championship look like the Ducks’ to lose.

It says everything about the Pac-12 that the team with the second-best odds to win the conference ahead of the season (USC, +275) fired their coach after two games.

Each of these schools giving chase has suffered at least one loss, which range from understandable (Arizona State at #23 BYU) to unsettling (Washington to FCS Montana).

Looking to advanced metrics for some sort of clarity reveals that despite the early stumbles, USC and UCLA still have top 10 offenses according to Bill Connelly’s SP+ efficiency ratings. On the other hand, Arizona St., Utah, and Washington all still have top 25 defenses. Proceed with caution, but at least one of these schools is bound to right the ship and offer some sort of challenge to Oregon.

Will Probably Annoy One of the Above Teams Once or Twice

Through three weeks, these three are 1-5 against FBS opponents. They may be worth monitoring for a single game value play (Washington State can especially move the ball), but avoid for futures.

Only if You Really Don’t Care About Losing Money

Colorado took Texas A&M to the wire in Week 2, an act they followed with a 30-0 loss to Minnesota.

Meanwhile, Arizona will be hoping to just press fast forward on the season after an 0-3 start.

So far, the CFP national championship race is much more open than anticipated, with nearly all of the perennial contenders having at least one early stumble.

Could this then be the Pac-12’s first playoff appearance since 2016?

If you’re buying into this being a true down year for the sport’s traditional blue bloods, it might not be a bad time to take a flier on the Ducks, whose +1800 odds are currently sixth-best in the nation.