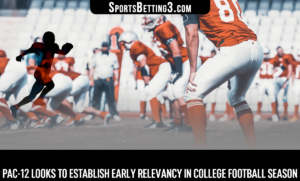 The Pac-12 Conference has been a forgotten entity when it comes to the College Football Playoff.

Only two schools — Oregon (2015) and Washington (2017) — have reached the CFP, and neither have won the national title. The Pac-12 was out of sight and out of mind last season in the national picture as the Huskies were the highest-ranked team in the final CFP standings at No. 9.

With a wide-open conference race expected this season, there is an urgency for someone, anyone, from the Pac-12 to emerge as a flag-bearer for the conference. They get two such chances at the start of the season on Aug. 31 when No. 13 Oregon faces 16th-ranked Auburn in the AdvoCare Classic in Arlington, Texas, and No. 23 Stanford hosts No. 25 Northwestern.

Oregon’s Pac-12 and CFP hopes hinge on quarterback Justin Herbert, who opted to return for his senior season instead of entering the NFL Draft where he likely would have been a first-round selection in a weak 2019 class. The 6-foot-6 senior, trying to follow in the Heisman footsteps of former Oregon QB Marcus Mariota, threw for 3,151 yards and 29 touchdowns last season as he led the Ducks to a 9-4 record.

Though the Ducks lost wide receiver Dillon Mitchell to the NFL, they have a potential very good replacement in Juwan Johnson. Johnson arrived in Eugene after transferring from Penn State, where he caught 79 passes for 1,053 yards the last two seasons. The running game is anchored by CJ Verdell, who totaled 1,018 yards and 10 touchdowns as a freshman.

Auburn has been to a bowl game six straight years, but not even a 63-14 thumping of Purdue in the Peach Bowl to end last season has eased the pressure on Gus Malzahn, who had signed a seven-year, $49 million contract before the 2018 season. The Tigers finished 8-5 overall but fifth in the SEC West, well off the standard set by Alabama.

Malzahn’s biggest concern is settling on a starting quarterback, as freshmen Joey Gatewood and Bo Nix are vying for the spot following Jarrett Stidham’s decision to turn pro. The inexperience there could negate strength at the wide receiver position, where Anthony Schwartz and Seth Williams combined for 891 yards and seven TDs as freshmen.

Stanford’s four losses last season came to the nation’s elite in Pac-12 division winners Washington and Utah, CFP semifinalist Notre Dame, and Top 10 conference rival Washington State. David Shaw has compiled an 82-26 record in nine seasons on The Farm, but his nine-year streak of top-three finishes in the division is in jeopardy.

Shaw, though, does return quarterback K.J. Costello, who enjoyed a breakout season throwing for 3,540 yards and 29 touchdowns. The Cardinal struggled on the ground as 2017 Heisman runner-up Bryce Love finished with only 739 yards in an injury-plagued 2018, but Cameron Scarlett is the new feature back after serving as Love’s understudy.

The defense also has major holes to fill, with leading tacklers and linebackers Bobby Okereke and Sean Barton gone. Barton was a surprise departure, opting to retire from football with a season of eligibility left. Cornerback and first-team all-Pac 12 pick Paulson Adebo anchors the defense after totaling four interceptions and a conference-high 20 passes broken up.

Northwestern makes the trek west from suburban Chicago looking to repeat as West Division champion of the Big Ten. The Wildcats went 8-1 in conference play and won the West by three games before losing to Ohio State in the Big Ten title game.

There are big expectations facing quarterback Hunter Johnson after transferring from Clemson and sitting out last season. Johnson completed 21 of 27 passes for 234 yards and two touchdowns in mop-up duty in seven games in 2017 and is being tasked with upgrading an offense that ranked near the bottom of the FBS in yards per play and plays of 10 or more yards.