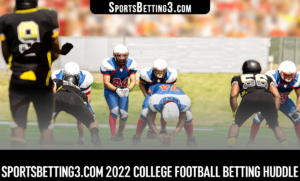 Save for the first season of the College Football Playoff in 2014, which didn’t feature any Southeastern Conference participants, the NCAA Division I landscape has been dominated by the SEC. Five of the past eight national champions have come from the conference based primarily in the Southern United States. Two of the championship games have featured All-SEC title games, including Georgia’s 33-18 victory over Alabama last season.

With kickoff for college football still months away, now is a good time to look at the futures market and find value on what will happen this fall.

Ready for the big stage

Expectations will be sky-high in College Station for the 2022 football season. Texas A&M signed the highest-ranked recruiting class ever by convincing seven of the 34 available five-star players to come to play for the Aggies. This will be important for a team looking to bounce back from an 8-4 season, which featured a victory over Alabama.

Will Texas A&M have the pieces to finally break through and challenge for the SEC crown? The Aggies are +1200 to win the conference and +2000 to capture the national title. Texas A&M’s non-conference schedule will help, mostly because it won’t play any road game.

The Aggies toughest non-confererence game, on paper, will be a Sept. 17 meeting with the Miami Hurricanes at home. Making things tougher for Texas A&M will be road trips to Alabama and Auburn. The Aggies situation largely relies on converting all of their highly-regarded players into productive collegiate players.

The Aggies have three players in the running to start at quarterback, but no one has established himself yet. If Texas A&M’s recruiting class is as good as its hype, and the Aggies find a quarterback, the Aggies are a good bet to win the conference and national title.

Sophomore quarterback C.J. Stroud will be eager to build off a strong freshman year by challenging for the Heisman as a sophomore. Stroud passed for 4,435 yards, which ranked fifth nationally, and threw 44 touchdowns against six interceptions. If Ohio State can regain its footing as the Big Ten’s top program, Stroud is a good look as a Heisman Trophy bet at +275.

There is no value for the Buckeyes to win the Big Ten, as Ohio State is a -200 favorite. The Buckeyes odds to win the national title are at +250, which may be worth a wager. Ohio State is coming off a season where it won the Rose Bowl after taking a disappointing loss to Michigan to end the season. Seeing the Wolverines celebrate a Big Ten title and CFP appearance may be enough to drive the Buckeyes back to the big stage.

Ohio State will open the season with an interesting home contest against Notre Dame, which will be breaking in a new coach. The Buckeyes will play their first five games at home. Ohio State’s only potential pratfalls are a trip to Michigan State April 8 and an Oct. 29 road matchup with Penn State.

Southern California spared no expense in its coaching search, bringing in former Oklahoma star coach Lincoln Riley. In five years with the Sooners, Riley compiled a 55-10 record, including three appearances in the CFP. When he came out to Los Angeles, Riley didn’t come empty handed.

Riley also lured sophomore quarterback Caleb Williams to come with him. Williams replaced Spencer Rattler as Oklahoma’s regular starter last season. Stepping in to replace someone who had billed as a potential Heisman candidate didn’t phase Williams, who passed for 1,912 yards with 21 touchdowns against four interceptions.

The PAC-12 has been down for the past several seasons and hasn’t had a team compete for a national title since Oregon lost to Ohio State in the first year of the CFP in 2014. With a weakened conference, Riley may have found another place where he can find success quickly.

The Trojans are worth a look at +4000 to win the national championship. However, USC’s best bet may be to win the PAC-12, as the Trojans have been set at +350.