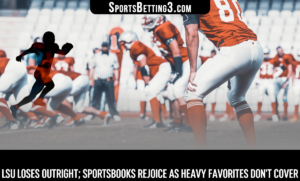 This past weekend featured a continued successful return to college football but bettors did not love the results. According to one sportsbook, 96% of the money was placed on the Alabama Crimson Tide to cover 28.5. Sportsbooks collected big money when Missouri was able to cover the 28 point spread, albeit in a loss by 38-19. As we prepare for fanless college football, these outrageously large spreads will proceed with extreme caution.

With the uncertainty that brings these games, spread picks are going to be extremely hard to come by. The reason being is how many spread bets that were placed last week and missed. The five most bet spreads of the week did NOT cover. Texas was lucky to escape with a win last week. Texas -17.5 was bet at 93% in the game with Texas Tech being only 7% of the bets.

Sportsbooks made most of their money on big favorite spreads, lets not give them our money this time…

Florida looked very strong last weekend and their quarterback appears to be a legitimate player. The spread is rather large however with the Gators being a +19.5 underdog. Kyle Trask looked very capable of putting up points as they threw 6 touchdowns and dominated Ole Miss.

On the other side, South Carolina quarterback Colin Hill looked very capable in his first game as the starter. After being down 21-7, South Carolina roared back tying the game at 24-24. Unfortunately for the Gamecocks, Tennessee punted the ball when it hit a Gamecock blocker and Tennessee got the ball back. The loss seems flukey and they are undoubtedly more talented than Florida.

However, since the spreads looked quite fishy last week, big spreads are a major no, no. The points total is where the value lies after last weeks offensive explosions.

The Pittsburgh Panthers and NC State Wolfpack somehow have an over-under of only 46 points. This makes little sense, for no other reason than look at their average points leading up to this game. The Pittsburgh offense is averaging a whopping 33 points per game thus far in the season. Furthermore, the NC State offense is putting up 34.5 points per game.

With each team averaging well over 5 yards per play, the offense should be coming quickly. Expect teams to work diligently offense and make the over rather easily. So far, 64% of the money is going on the over in this game. The money should continue to fly here as the two teams have put up points quickly thus far.