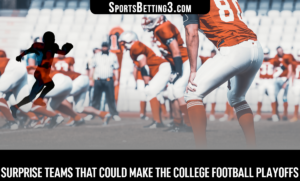 A new season means every team has hopes of reaching the College Football Playoff. For most, an undefeated season is required, but powerhouse teams like Clemson and Alabama have the advantage of being able to lose a game and still find their way into the playoff (most likely). This will be the sixth season with the CFP and only ten different teams have made an appearance. Outside of the usual teams that make their way into the College Football Playoffs (Alabama 5, Clemson 4, Oklahoma 3, Ohio State 2), what teams have a solid chance of making their first CFP appearance this season?

Of the four teams on this list, Florida has the best shot. They enter the season ranked in the Top 10 and any team in the SEC has a chance when the season begins. Finishing with a one-loss record or better in the SEC is all but a guaranteed spot in the CFP. An SEC schedule is never easy, but of all of the powerhouse teams in the SEC this year, Florida has one of the easier schedules (only ranked opponents are LSU, Georgia, and a so-so Kentucky team). Florida put together a solid recruiting class, ninth-best in the nation. They had some big wins last season and will look to avenge their first loss to Kentucky last season in over 30 years.

Opposite of Florida, Texas A&M has one of the more difficult schedules in not only the SEC but the entire country. That can work as a gift or a curse for this team. Look for Jimbo Fisher to have this team ready for a breakout season and with big matchups against Alabama, Clemson, Georgia, and LSU, A&M will have plenty of chances to shoot up the rankings with big wins. If this team can make it through with only one loss and potentially get a shot at the SEC title instead of Alabama, then Texas A&M will be making its first CFP appearance this season. A&M had a huge boost in recruiting this off-season, finishing with the sixth-best class in the country. Look for QB Kellen Mond to have a Heisman worthy season under Fisher’s guidance.

Utah is coming off of a season where they made a Pac-12 Championship Game appearance but lost a tight one to Washington 3-10. Games against Washington and Washington State are the Utes only real challenges this season. If Utah can get through the season with a loss to only one of those two, and rebound with a victory over them in the Pac-12 Championship, then the Utes could find a backdoor entry into the CFP. An undefeated season will surely punch their ticket, and they have a great shot at pulling that off as well. Utah got a majority of its key players back from a successful 2018 season and this team should be ready to take the next step and win the Pac-12 and maybe more. With QB Tyler Huntley back (who went 4-0 last season before breaking his collarbone), the Utes offense should be even more dangerous this season.

Army is the most likely of the four teams on this list to go undefeated. Their schedule is also the easiest on this list and they only face one true test this season that will define their 2019 season. A matchup against Michigan in Week 2 will set the pace for the Black Knights. If they can pick up a win there and avoid any upsets, they will finish the season 13-0 after defeating Navy. Army’s biggest concern will be how they win. Finishing 13-0 probably won’t be enough for this team, so blowouts will be a must. Beating Michigan may not be enough, they will need to run the score up in every one of their games this season and they know that. QB Kelvin Hopkins Jr. will have another big year running the ball and will look to break some quarterback rushing records this season.