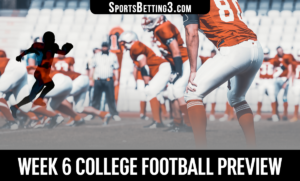 We move on to Week 6 College Football after very strong week 5 predictions. In that section, we saw a 2-0 record, easily picking out two overs. Florida’s offense looks as electric as ever and the South Carolina Gamecocks kept it close enough.
We knew the spread bets would be tough and Vegas was right on with this one. Florida was -14.5 and South Carolina covered losing by exactly 14. A lot of these spreads are going to be tough to predict.
We will keep up with these trends and continue to deliver quality insight here. Point totals will always be trendy spots to attack especially with no fans in the stadium.

The week 6 college football slate starts with Texas who offers plenty of value. Texas has tons of pressure on them to win this game. In 2018, Texas had one of the best-recruiting classes in the country. They are now all juniors looking to make a name for themselves and get into the NFL.

However, Texas is coming off of a loss in a game they clearly should have won against TCU. Furthermore, they looked completely uninspired against Texas Tech in the opener. This is one of the more high profile games on the college football slate. We have a desperate Texas team that cannot afford to lose their second game of the year. Expect Texas to play desperate with this team of athletes that should not be underdogs.

Oklahoma is in the total opposite spot as Texas. Oklahoma has had top recruiting classes and sustained success for years. Coach Lincoln Reily does not have the horses as he had in the past. There is nothing wrong with that, however. They are allowed to rebuild once every 15 years.

Two picks this week to start us off! Hooray football!

Let’s start out with this, Trevor Lawrence is one of the best college football quarterbacks of all time. He is going to be the number 1 pick in the draft in April. Clemson has a fantastic team and deserves to be rated the number 1 team in college. Having said all of that, Clemson should not be 14 point favorites.

The Miami Hurricanes have one of the nastiest defenses in college football. Miami does all of the fundamentals well. Manny Diaz has the defense cooking where they are fast and can rush the passer well. Their coverage has been solid as well in the secondary.

It is not just about the defense. Miami is averaging 43 points per game so far this year. The matchup is interesting with Miami’s rock-solid defense vs. Clemson’s offense. 62 feels like a high number for this game. Over’s have been hitting at a ridiculous percentage this year. But I’ll take the under on that. Miami keeps it close but Clemson ultimately wins.