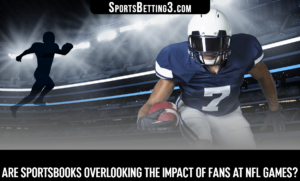 The NBA Conference Semi-Finals are nearing a close and the sports world has taken notice! Readers of the weekly column know that the Milwaukee Bucks were a clear fade in the Eastern Conference this season. The Bucks were clearly outmatched against Miami where they were defeated in 5 games. With the playoffs continuing and the NFL regular season arriving, we look at the oddities that we will face in a fan-less NFL season.

Fans are a crucial part of NFL games in the league. It is going to be a completely different game this Sunday and one that sportsbooks have not really changed their lines on. It is going to fascinating to see how sportsbooks adjust and see how road teams fair this season. Will road teams win more frequently than in the past? Are point totals going to go higher or lower? Let’s look at the data…

Are Home Games Still Worth 3 Points?

Typically when a team hosts another in their stadium, oddsmakers immediately believe that home-field advantage is worth 3 points. Now that there are no fans to distract the road team while they are on offense, can we really expect the travel alone to be worth 3 points? Week 1 NFL lines have been available since the beginning of the summer and we will dive into a few of those to see what oddsmakers value the presence of the fans at.

*Betting lines for open started in May.*

Just a few examples have been listed and were chosen because there has been little player movement between these teams in regards to trades or signings. Any players being moved ruins the data. The results are fascinating as sportsbooks have not adjusted to the lack of fans in their games. It would appear that sportsbooks are expecting the same home-court advantage this season the same as any other. This would appear to be a foolish endeavor as the presence of fans cannot be understated.

Conclusion: Advantage to the road underdogs.

Will There Be An Offensive Overload With No Crowd Noise?

It is third down, your team is up by a touchdown, there are two minutes left in the game and the stadium plays a graphic imploring the fans to “MAKE SOME NOISE!!” There is a reason that the stadium looks for fan noise to distract the road team. It makes it difficult for quarterbacks to make calls at the line of scrimmage. The Seattle Seahawks are known for this more than any team in the NFL. In May, Forbes posted the Over/Unders from a few sportsbooks prior to no fans being announced in the NFL. Different sportsbooks have different lines of course but the salient point remains, point totals in games have not been adjusted for empty stadium games.

All of the results show a trend of similar or identical point totals. This might spell bad news for defenses who are already without a preseason.

Conclusion: Expect the point totals to go over in the early part of the season.