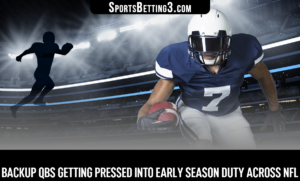 One second-string quarterback started the season under center due to retirement. A second had to step in less than 10 minutes into the season. Two others will be stepping in for future Hall of Famers this weekend, with one likely the starter for the rest of the season. One team is already on its third-string quarterback, and another is switching signal-callers. Welcome to the NFL in 2019, where if you do not have a capable backup at the ready, your season may be over before it begins.

After just two weeks, 42 different quarterbacks have attempted at least one pass. Some backups have been pressed into duty due to injuries, some have gotten mop-up time, and some — in the case of the Miami Dolphins — are getting snaps with no rhyme or reason. The results have created head-spinning moments and challenging decisions when it comes to betting on NFL games.

New York, New York, It’s a Hell of a Town

The New York Giants gave rookie Daniel Jones snaps in their season-opening loss at Dallas, and now they are giving him the keys to the kingdom. Pat Shurmur decided now is the best time to start the sixth overall pick over two-time Super Bowl winner Eli Manning, and it is hard to dispute the logic.

The Giants are 0-2 and like an empty jelly donut offensively. They have 840 total yards through two games but just 31 points. They have a potential Hall of Fame running back in second-year pro Saquon Barkley who cannot get enough touches either rushing or receiving. Having Jones and Barkley grow together makes sense for Shurmur — the Giants are not catching the Cowboys and Philadelphia Eagles in the NFC East. Additionally, New York can get the jump on Washington, which has its own quarterback-in-waiting in Dwayne Haskins.

The Giants’ co-tenants at MetLife Stadium — the Jets — are the first team since the 2009 Carolina Panthers to need a third quarterback through two games. In an “only the Jets” moment, starter Sam Darnold is currently sidelined with mononucleosis and expected to miss a month. Backup Trevor Siemian is done for the season after his ankle buckled on a hit by Myles Garrett in Monday night’s 23-3 loss to Cleveland.

Enter Luke Falk, a 2018 sixth-round pick who went from practice squad to backup to Week 3 starter in five days. He will face a fellow 199th overall draft selection — albeit back in 2000 — and arguably the greatest coach in NFL history for his first start as 42-year-old Tom Brady, Bill Belichick, and the New England Patriots host the Jets on Sunday.

Falk is one of two Washington State quarterbacks directing NFL offenses. Fifth-round pick Gardner Minshew was a surprise winner of the No. 2 job in Jacksonville and immediately had to deliver in Week 1. Nick Foles — the patron saint of backup QBs as a Super Bowl winner with Philadelphia — suffered a broken clavicle on a hit after delivering a touchdown pass in the first quarter of the Jaguars’ 40-26 loss to the Kansas City Chiefs.

Minshew proved he can handle the speed of an NFL game and nearly rallied Jacksonville to a win at Houston last Sunday. He may have even been able to win the game had Doug Marrone called for a pass on the two-point conversion instead of a handoff to Leonard Fournette after Minshew threw a TD pass to D.J. Chark with 30 seconds to play to make it 13-12.

The backups with the most pressure are in Pittsburgh and New Orleans, where Mason Rudolph and Teddy Bridgewater are stepping in for Super Bowl winners and veterans Ben Roethlisberger and Drew Brees, respectively.

Rudolph, stepping in after Roethlisberger suffered what turned out to be a season-ending elbow injury, threw for 112 yards and two touchdowns in Pittsburgh’s 28-26 loss to Seattle. Bridgewater, whose career fortunes drastically changed when he tore his ACL with Minnesota in 2016, struggled replacing Brees in New Orleans’ 27-9 loss to the Los Angeles Rams.

The good news is both quarterbacks have an elite No. 1 receiver to help them navigate their offenses, with Rudolph leaning on JuJu Smith-Schuster and Bridgewater getting to throw to Michael Thomas while Brees recovers from thumb ligament surgery.

When Jacoby Brissett was acquired from New England two years ago, it was out of urgency right before the start of the season with Andrew Luck out through injury. This time around, Brissett became the No. 1 permanently after Luck’s stunning retirement, but getting a full camp of starter’s reps has paid huge dividends.

Brissett has thrown for 336 yards and five touchdowns in helping Indianapolis split its first two games and has the Colts in position to at least contend for the AFC South title — which was in question after Luck walked away. He has completed 69.1 percent of his passes and more importantly, has job security. Brissett signed a two-year, $30 million extension right earlier this month and has go-to skill players in running back Marlon Mack and wide receiver T.Y. Hilton.

… And Then There’s the Dolphins

Aside from being all-in on a complete rebuild, no one knows what to make of the Miami Dolphins. First-year coach Brian Flores opted to start journeyman Ryan Fitzpatrick over 2018 No. 1 overall pick Josh Rosen, but the club has little talent after dealing away top players to stockpile picks. Miami has been outscored a staggering 102-10 in losing its first two games, and Fitzpatrick had two of his three interceptions returned for touchdowns in last weekend’s 43-0 loss to New England.

Rosen has seen action late in both games, and Flores is reportedly considering starting the 2018 No. 1 overall pick in what looks to be another certain loss Sunday at NFC East-leading Dallas. Speculation has already begun whether the Dolphins will finish 0-16, and Flores must weigh the pros and cons of Rosen taking a second straight year of lumps will hinder his long-term development.