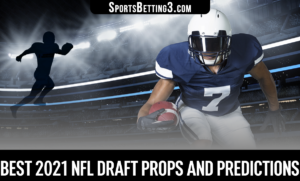 I am not sure what is better – Christmas season or Draft season. The NFL Draft is one of the most fascinating times as a football fan. Every team is bringing in new fresh talent and anyone of these players is sure to pop. From here, we can prepare to bet on the draft and find the best NFL Draft props.

The draft props that are available vary by book. But overall, a good sportsbook offers you typical props like over/under pick selection and which team they will go to. We will use the best odds across all books to find the best value across the industry.

Yes, we all know that Trevor Lawrence, Zach Wilson, Justin Wilson, Mac Jones, and Trey Lance will get drafted at the top round 1. So we have a bare minimum of five. Now we need to find the 6th quarterback that can be drafted at the end of round 1.

This is where we land on Stanford QB Davis Mills. Mel Kiper described Davis Mills as a first-round talent with extremely limited experience. He is absolutely a project and Mel Kiper has him projected to go at 51. However, Peter Schrager has Mills going at the back of round-one. Kiper even explained that Mills is a player that talented teams bet on.

Where to do talented teams draft? Back of round one!

Penei Sewell is the consensus top offensive lineman to be drafted. It feels like his grasp on this accomplishment is beginning to wane. His over/under draft prop has been dropping from 5.5 to 6.5 across the board. The Cincinnati Bengals draft 5th and I expect them to draft an offensive lineman to keep Burrow upright.

Moreover, the Bengals already have a left tackle, they need a more versatile offensive lineman. Unfortunately, Sewell is not that opening the door to Slater. Even if he doesn’t go to the Bengals, I will assume they took Ja’Marr Chase. Leaving the Dolphins available to Rashawn Slater.

These are just extras that are worth a stab. Ultra-long shots but can pay huge dividends!

Rashawn Slater To Be Drafted By The Bengals +900

This number is way too high. Slater is one of the top options for the Bengals if they were to draft an offensive lineman. It depends on their organizational movement. Burrow could easily want his favorite college receiver, Ja’Marr Chase. However, they go offensive line – it should be Rashawn Slater.

Justin Fields To Be Drafted By The Patriots +900

This would require a trade-up to see if they can get up far enough. The Falcons should be taking offers for the pick and it seems like Mac Jones is locked in at 3. This leaves Fields available and all reports say that the Pats love Fields.

Bellichick almost never trades up but I think he realizes the need for a legitimate quarterback. It is very possible that Justin Fields joins Bellichick’s empire as the heir apparent after King Brady’s departure.