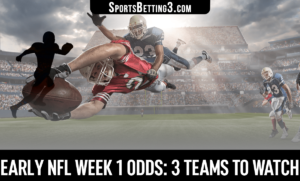 In only two and a half months, the 2022 NFL season will begin. After a tremendous postseason, everyone is even more excited to see the season begin on September 8 with the Buffalo Bills (-1) taking on the defending champion Los Angeles Rams at SoFi Stadium. Josh Allen (MVP favorite; +700) and Matthew Stafford are ready to kick off the new season.

So, which teams are the ones to watch in the first week of the season? We have some very exciting teams to keep an eye on as they are all contenders to win Super Bowl LVII at State Farm Stadium in Glendale, Arizona.

Thursday night’s contest to open the season will be a treat, as the Bills take on the Rams for the second time in three years. Buffalo will look to continue its recent success against the Rams franchise. The Bills (+650) are the Super Bowl favorites this season while the Super Bowl LVI champs are fifth at +1100. Buffalo seems like a good bet in Week 1.

This game should be one of the best contests of Week 1, as Sean McDermott’s squad looks to bring Buffalo its first Super Bowl championship. In McDermott’s five seasons, the Bills have made four postseasons, and each of the last three. Last year ended in a devastating overtime loss to the Kansas City Chiefs, which led to a change in the overtime rules heading into 2022.

Those very same Chiefs will also be on the road for Week 1, as they play Sunday late afternoon. After falling short to the Cincinnati Bengals in the AFC Championship Game in overtime, the Chiefs are back it looking for their eighth straight playoff appearance and third Super Bowl appearance in the last four years. Kansas City (+1000) is tied for third in Super Bowl odds with the Green Bay Packers. The Cardinals are +3300.

Arizona struggled to finish its 2021 season on a strong note, as the Cardinals lost to the eventual champion Rams in the wild card round. The Chiefs seem to be a decent bet to win by at least a field goal in this Week 1 matchup.

The Buccaneers and Cowboys will face off yet again in Week 1. They had a very exciting opening game to the 2021 season. Tampa Bay (+750) is second in Super Bowl odds, with Dallas coming in at +1800. It will be Tom Brady starting his 23rd NFL season, as the Buccaneers look for their third Super Bowl championship. Bet the Bucs in Week 1.