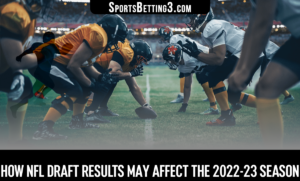 The 2022 NFL Draft will begin on April 28 at Caesars Forum in Paradise, Nevada, as the 32 NFL teams will combine for 262 total picks over the course of a three-day seven-round extravaganza. The 87th NFL Draft, which will include four New York picks in the first 10 selections, is always a big deal for the fans of every team. So, let us take a look at where we stand in terms of NFL futures and how the NFL draft may affect them.

Neither the Los Angeles Rams (+1100) nor the San Francisco 49ers (+1400) have a first-round selection. In fact, the first pick for these two NFC West powerhouses will be the 49ers’ No. 61. Meanwhile, the Rams will not select in the top 100, but they do not have the fewest number of selections. The dark-horse Miami Dolphins (+3500) do.

So, let us take a look at the top 2022 selections, and how the best players in the draft may affect the upcoming season:

After four last-place finishes in the AFC South, the Jaguars are onto their fourth coach in their last three seasons. However, they are not the worst team in terms of Super Bowl odds. They are not even projected to finish last in their own division.

With Jacksonville in need of an edge rusher, Travon Walker (-190) is the projected No. 1 overall pick out of Georgia. The 2022 national champion should help a defense that finished 28th in scoring and last in turnovers.

The Lions (+15000 Super Bowl odds) seem to have their eyes set on another defensive end in Aidan Hutchinson, who is -200 to go as the second pick. Detroit finished with the third-fewest sacks in 2021, along with having the second-worst scoring defense.

You may know who has the best odds to finish last in the AFC South. It is none other than the Texans (+17500 Super Bowl), who own the worst future odds. They are tied with the New York Jets for that dubious honor.

Houston appears to be going with a defensive selection as well, as they also were among the worst defenses in the league. LSU cornerback Derek Stingley Jr. (+330) is the pre-draft favorite to fall to No. 3.

The New York squads then dominate the remainder of the top 10, and they look to add their defenses, too. The top of the draft will be dominated by defensive selections — except for one Jets pick and possibly the Falcons at No. 8 — so we could be seeing the turnaround of one or multiple of these top-of-the-draft defenses.