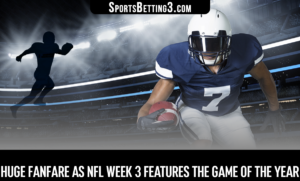 Shades of week 11 of 2019, the NFL will feature its two best teams on Monday Night Football. Rather than Chiefs vs Rams, this game will feature the Chiefs and the Baltimore Ravens. The two AFC powerhouses are the biggest and baddest teams in the NFL and fans are clamoring to see this primetime game. The game will be featured on ESPN and the betting lines appear juicy for this early season affair.

The slate does not stop there. The Packers and Saints matchup looks to be electric and sportsbooks are expecting a lot of points to be put up between the two teams. While COVID-19 has not been the issue that many had predicted, the NFL start has not gone unfazed. NFL players have been blasted by injuries with a record 8 ACL tears in one day in the league. A frustrating development for anyone who is a fan of Nick Bosa, Saquon Barkley, and Courtland Sutton. The impact will be felt during week 3 of the season without marquee players that also feature Christian McCaffrey, Raheem Mostert, and Michael Thomas.

The Dallas Cowboys face off against the Seattle Seahawks who are both coming off of dramatic wins. The Cowboys looked atrocious defensively against an admittedly talented Atlanta Falcons offense. Seattle on the other hand appears to have abandoned their run-first approach to allow Russell Wilson to be what he is, the best quarterback in the NFL. When asked about Wilson prior to the week two matchup against Seattle, Patriots coach Bill Belichick said,

“Honestly, I think he’s in a way underrated by the media or the fans, I don’t know. But I don’t really see anybody better than this player,” Belichick said. “This guy is a tremendous player.”

A coach who rarely complimented Tom Brady one of the great quarterbacks in league history, Wilson got the utmost respect from Belichick.

Dak Prescott and the Cowboys put up 40 points in their game against the Atlanta Falcons where Dak scored 3 rushing touchdowns. Russell Wilson with 5 touchdowns against the Patriots defense which is one of the best in football should be able to replicate against the Cowboys. This game is a shootout. I don’t care about the number, its over.

The fact that this matchup is happening in week 3 of the league truly is a treat. Expect this game to have shootout potential. The number is rather large here scaring me away from the over of 51.5. Watching the Chiefs put up 23 points in a game that went down to the wire against the Chargers, my hopes to hit that number took a hit.

I do think this is a tough matchup for the Chiefs who typically struggle to stop the run. The Ravens have two strong running backs and Lamar Jackson is the best running quarterback we have seen in the modern era. The Ravens are -3 against the spread and I like that pick. Ravens will surprisingly stifle the Chiefs offense and have no real weaknesses on their roster.