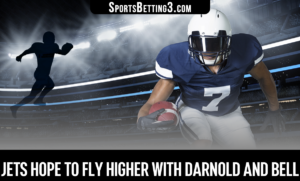 The New York Jets have a new feature running back in Le’Veon Bell and a new head coach in Adam Gase. They hope the duo will play pivotal roles in the expected progression of second-year quarterback Sam Darnold in 2019.

Jets re-tool with signing of Bell and hiring of Gase

The Jets finished last in the AFC East with a 4-12 record in 2018, which led to the firing of Todd Bowles. They stayed within the division for his replacement, tabbing Gase after he was let go following three seasons and one playoff appearance with the Miami Dolphins.

Gase carries a reputation as a quarterback whisperer — something the Jets needed since they believe they have a franchise cornerstone in Darnold. The third overall pick in the 2018 draft showed plenty of promise with 2,865 yards and 17 touchdown passes in 13 games, but he was at his best late in the season.

Darnold threw for 931 yards and six touchdowns with only one interception in his last four games after returning from a foot injury, posting a 99.1 passer rating. The Jets, though, finished ahead of only Arizona in total offense at 314.1 yards per game, which prompted the signing of the talented yet mercurial Bell.

Bell enters 2019 with much to prove

Bell, who sat out last season after refusing to sign a $14.5 million franchise tender with the Pittsburgh Steelers, inked a 4-year, $52.5 million deal with the Jets that included $35 million guaranteed. He will be closely scrutinized for better play after a year of not taking hits, but the three-time 1,200-yard rusher instantly upgrades New York’s offense as a dual threat running and receiving.

The three-time Pro Bowl selection has cleared 1,850 scrimmage yards in three of his last four seasons and had 75 or more receptions in 2014, 2016, and 2017. The Jets also found Darnold a quality slot receiver in the free agent market, signing Jamison Crowder to bolster a receiving corps that had no player finish with more than Robby Anderson‘s 50 catches and 752 yards.

Injuries limited Crowder to 29 receptions and 388 yards in nine games for the Washington Redskins last year, but he did average 64 catches and nearly 750 yards in his first three seasons in the league.

Though the Jets are likely not a playoff team in 2019, oddsmakers are bullish on their potential improvement. FanDuel has an over/under of 7.0 wins, which is the second-highest total in the AFC East. If New York’s revamped linebacking corps, led by free agent signing C.J. Mosley, can help limit the damage the Jets absorbed in the middle of the field and free up star safety Jamal Adams to make more big plays, a .500 season could be in the offering.