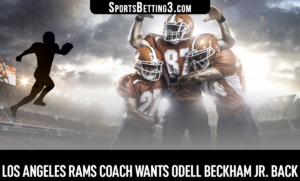 Having played a key role in helping the Los Angeles Rams to their first Super Bowl in over 20 years, coach Sean McVay has made it abundantly clear he wants Odell Beckham Jr. to keep hold of the 29-year-old’s short-term contract set to come to an end this offseason.

Beckham Jr. has seen his flagging career turnaround in a matter of months. His recent spell at the SoFi Stadium being a hugely effective one. The former New York Giant and Cleveland Brown scored seven touchdowns over the course of his 11 2021-22 starts. His most memorable catch was the first touchdown of Super Bowl 56. The Rams went on to win 23-20 over the Cincinnati Bengals.

Los Angeles wouldn’t have been among any experts’ sports betting picks at the start of the season. Surprisingly, McVay’s side put in a great 12-5 regular season record. Manfully led by quarterback Matthew Stafford, they remain among next season’s Conference and Super Bowl favorites.

Sean McVay will hope that he can convince Beckham Jr. to stick around. The Los Angeles Rams are no doubt lining up a big contract for the 2014 Offensive Rookie of the Year.

On the possibility of such a deal being done, McVay stated:

“Odell is someone we want to continue to work with…I can’t say enough about him as a teammate, as a person. I really love him. I cherish our relationship that we were able to establish and develop, and I’m hoping that there will be many more years to come with us working together.”

Despite Beckham’s halftime exit from the Super Bowl due to a torn ACL, he had already done a great deal of damage to the Bengals. Treatment could last up to 12 months. Nonetheless, McVay’s interest in the wide receiver remains strong.

“I’m confident he’s gonna attack this with a resilient mindset and mentality, and we do want him to be a Ram.”

That kind of commitment is sure to make Beckham Jr. consider a longer spell at the Rams, not least as his short-term career in Los Angeles has rejuvenated a player who wasn’t really reaching his potential in recent years.

Odell Beckham had a real up-and-down time over the past two seasons in Cleveland and has put his career back on track at the Rams, and both he and McVay will hope for a successful return following his ACL rehabilitation.

Last season was McVay’s fifth in charge at the Rams. So far, he’s made a dramatic impact on the franchise. Prior to his arrival, they’d gone 12 seasons without tasting post-season action. He quickly turned around a team with a 4-12 losing record to one that posted an 11-5 record in 2017. It’s been onward and upward ever since.