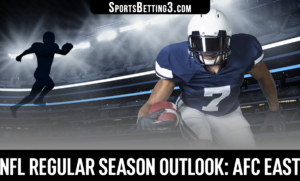 175 days ago, the New England Patriots beat the Los Angeles Rams 13-3 in the lowest scoring (and most boring) Super Bowl in NFL history. Since then, the only thing more surprising than any of us waking up after the end of the third quarter, is how much roster movement there was this offseason. With over 1,500 players across 32 teams and an always wild free agency, it’s nearly as hard to keep up with all the change in an NFL offseason as it is to stop watching the butt fumble.

But worry not, SB3 is here for you.

The NFL regular season kicks off in 41 days, when the Green Bay Packers travel to Chicago to take on the Bears (8:20pm Eastern on NBC). Before then, we’ll highlight notable changes for each team, one division at a time, and throw in what the betting lines look like because of it. As a hat tip to the defending champs, we’ll start with the AFC East.

Head Coach Bill Belichick’s dynasty in New England has been defined by a system that doesn’t stop even when great coaches and players move on. This offseason will end up pushing that system to the test like none before it. Here’s why:

With that much significant change in New England, this might be the only offseason you’re not oversaturated with buzz about Tom Brady’s age. And still, New England is the favorite to win the Super Bowl again this year. Can anything bring down the empire? We’re about to find out.

The team that finished dead last in the AFC East and tied for the second worst team in all of football last year might just be poised for a turnaround. After winning four games last season, the Jets made a splash this offseason signing two of the best free agents available.

Unfortunately, part of the offseason splash was unnecessarily turned into a PR mess when new head coach Adam Gase (terrible hire) commented publicly that the team overpaid for Le’Veon Bell. Even still, the Jets will finally be a tier above the Clemson Tigers this season. In fact, this team should win four games against the Bills and Dolphins. They do that, and they might fool us all into thinking they could actually nab a Wild Card spot. (Spoiler, they won’t)

The Dolphins had a tumultuous offseason. For every good reason Miami fans have to be excited, there are at least two more questions. For example:

Miami’s head coaching move was a massive get. Neither Rosen or Fitzpatrick will be the long-term solution at QB if Miami decides to enter the Tua sweepstakes. Regardless, you can finally expect football success in Miami, but not yet. Give it three years and Miami might just be relevant on a level South Florida hasn’t seen since #13 retired. But this year, don’t expect too many W’s.

Place bets on the Miami Dolphins

On one hand, the Buffalo Bills put together a mediocre offseason. On the other hand, they’re still the Buffalo Bills. Nearly everything the Bills did was to help out Josh Rosen, who showed marked improvement in the second half of last season. But in the grand scheme of competing for a Super Bowl, it was just baby steps.

Could the Bills surprise us? Definitely. But the defensive line in Buffalo is as weak as the secondary is strong, and the receiving corps is top heavy. If Frank Gore and Shady McCoy can split time well enough to both stay healthy, the Bills might just finally have enough on offense to surprise everyone outside of Buffalo.

Place bets on the Buffalo Bills

The AFC East will yet again be three sub-par teams fighting for second place, the delusion of relevance, in the shadow of New England’s greatness. SB3’s NFL Regular Season Outlook will be back soon. We’ll look at the most entertaining division in the National Football League next: the NFC West. Fast paced, crazy offensive numbers coupled with surprisingly mostly weak defensives. Stay tuned.

Until then, be good sports, fans.