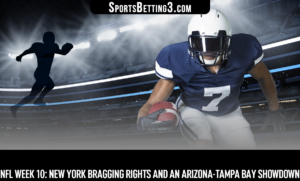 It is easy to follow the fates and fortunes of the best teams in the NFL on a weekly basis. Success begets success in most instances, and teams that are consistent can potentially help a bettor be a winner as well.

But this week is about how the other half lives. You know, the teams already out of the playoff race. The teams whose coaches are sometimes on a knife’s edge on a week-to-week basis. The teams with one eye already on the 2020 draft order.

This weekend, you can keep San Francisco and its perfect record and one-loss New Orleans. Instead, let’s focus on the four teams who have as many wins combined as the 49ers — the New York Jets, New York Giants, Tampa Bay Buccaneers, and Arizona Cardinals.

Both the New York Jets and New York Giants had low expectations entering 2019, yet both teams have managed to slink under that bar through the first half of the season with a combined three wins. The Giants just had their Monday night game against Dallas come undone by a black cat while Jets quarterback Sam Darnold saw ghosts last month in the form of Bill Belichick’s New England Patriots defense.

Proving oddsmakers have a sense of humor, there was a point this game was listed as a “pick ’em” at some sports books. It has since moved to the Giants being 2.5-point “road” favorites at the Sports Book against their Met Life Stadium co-tenants. Both teams are in clear rebuilds, though the Giants appear to have a more well-defined route since inserting rookie quarterback Daniel Jones as starter to grow with second-year running back Saquon Barkley.

Jones has had his moments, including a four-touchdown game in a loss to Detroit, but he also has an NFL high-tying 16 turnovers when combining interceptions and fumbles. Darnold is third in INTs with nine and has already endured a trying season that included missing three games with mono in addition to his hot mic gaffe that became a viral sensation.

Murray Looks for Positives in Rookie Season vs. Bucs

Kyler Murray knew it was not going to be easy in the NFL when the Arizona Cardinals made him the No. 1 overall pick in the draft. Like Jones, Murray has shown spots of brilliant play with the occasional ghastly error as he and first-year coach Kliff Kingsbury are essentially beta testing the offense. He has thrown for 2,229 yards but only nine TDs while getting sacked 29 times.

Arizona, though, is at least close to mediocre with a 3-5-1 record after a 28-25 loss to San Francisco. And given the strength of the NFC West, that may also be close to exceeding expectations considering they had a 5.5 over/under win total.

The Buccaneers are a different story, with this possibly Jameis Winston’s final season in Tampa. The 2015 No. 1 overall pick has 12 INTs among his 16 turnovers, negating the positives of his 2,407 yards and 16 TD passes. The defense has also struggled, ranking 31st in average points allowed (31.5) and passing yards (293.5).

Despite all that and a 2-6 record, the Buccaneers are still four-point favorites at home. The over/under, currently 52 points, is where most bettors will seek action given the live-wire offenses and substandard defenses.