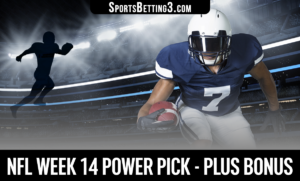 There have been so many great matchups over the last couple of weeks. And given the current state of NFL, we don’t expect that to stop anytime soon.

We’ve selected a couple of games that are not only going to be insanely fun to watch, but will be important to the NFL playoff picture.  They also promise great betting value at the best online sportsbooks that can help us turn a profit this week.

Two 10-2 NFC teams collide this weekend and the result will have a serious impact on the eventual playoff picture. The Niners are trying to keep within reach of a division title and guaranteed playoff berth.The Saints are looking to pull off the No. 1 overall seed. But motivation may come into play. San Francisco wants this one a lot more and it’s clearly more important to them.

Here’s what this game comes down to. San Francisco has the No. 2 road defense in the country allowing just 14 points per game. The Saints’ defense is average at home. So far this season, they’ve allowed 21.33 points per game at the Mercedes-Benz Superdome.

Defensively they Niners have a significant advantage in this meeting. Especially since they are No. 1 against passing teams.

Drew Brees leads the No. 4 home passing offense, used to pick apart lesser defenses all season. But they’ll be going against the best in the business on Sunday. The Saints will have to rely a bit more on theirNo. 14 ground attack and put the Niners D off-balance.

It’s almost a wash on offense. Both teams score roughly 24 points per game in this situation – the Saints at home and the Niners on the road. The only real difference is where the yardage comes from as they march down the field.

The Saints throw for 297.83 yards per game and supplement that with 114 rushing yards. The 49ers throwfor 219.33 and keep it balanced with 144.67 rushing yards. They have the No. 5 road rushing attack in theNFL. Meanwhile, the Saints are good at stopping the run ranking just outside the top 10.

Ultimately, we find an advantage favoring the Niners.

Most shops have the Saints favored by 2.5, but you can find a couple with the 49ers at +3. I would hurry on this number though, because 67 percent of the public is on San Francisco. It might move to 2.5 everywhere soon!

With such a distinct statistical advantage for the 49ers, +3 is an incredibly valuable shot at a backdoor cover. Let’s not forget that on top of being a great team this year, the Niners have a history of covering against the Saints. They are 4-1-1 ATS in their last six matchups.

The Seattle Seahawks have to go into Los Angeles and take care of business as 1-point favorites if they want to stay on top of their newly acquired NFC West throne.

I find this line interesting, especially since the Rams have shown how they struggle against good teams. The Ravens didn’t only beat the Rams, they destroyed them.

I have a feeling that people are looking at the Rams romp over the Cardinals and are thinking that they have bounced back, but that’s not the case. Arizona is just a terrible team.

The Seahawks offense is six points better in this situation on average and their defense is nearly five points better.

Seattle’s top ten road D is going to give the Rams problems.  Russell Wilson and crew will need to find ways to score. I handicap the Seahawks as 6-point favorites in this one and find it to be an extremely vulnerable sportsbook line.

Take Seattle -1. There is too much value on this game to let a close point spread scare you off.