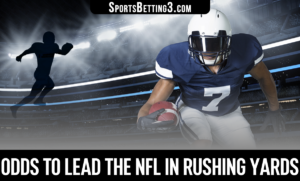 Since 2015, every team in the NFL each year has been a pass-first team, meaning they run passing plays at least 50 percent of the times. The only exceptions were the Buffalo Bills in 2015, who only passed on 49.9 percent of their plays and the Seattle Seahawks in 2018 (47.56 percent). While the NFL has clearly been a pass-first league for years, there is still no denying that having an elite running back can make all the difference. So which team has a running back that is capable of leading the league in rushing yards this season?

According to FanDuel Sportsbook, there are two running backs who are separate from the rest of the pack. Ezekiel Elliot of the Dallas Cowboys leads the way with +300 odds and Saquon Barkley of the New York Giants is a close second at +400. After that, the next best odds fall on Chris Carson of the Seattle Seahawks and Joe Mixon of the Cincinnati Bengals at +1300.

So which of the two favorites, Elliot or Barkley, has the best chance to lead the NFL in rushing yards next season? Elliot led the league last year with 1434 yards with Barkley finishing second with 1307 yards. However, there are a few more things you need to look at than just last year’s total yardage to see who will win the rushing title this season.

Last season, the Cowboys ran a rushing play on 43.23 percent of their total plays while the Giants only ran on less than 36 percent of plays. Elliot managed his 1434 yards on 304 attempts, averaging 4.7 yards per carry. Barkley ran the ball 43 fewer times than Elliot (261) and averaged 5.0 yards per carry.

The Giants will be without their top receiver from past seasons in Odell Beckham Jr. With a declining Eli Manning and no longer a true number one receiver, the Giants will be relying on Barkley more this season. The Giants are only projected to win around six games next season (FanDuel). If that is the case, we can expect to see Daniel Jones under center for the Giants at some point this season. Expect Jones to be eased into the offense with tons of running plays for Barkley, easily pushing him over the 300 carry mark. If Barkley can sustain his 5.0 yard per carry average from last season, we can expect to see him go over the 1,500-yard mark this season.