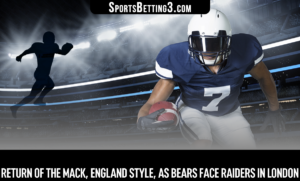 The decision by the Raiders to play one of their home games in London in their final season before moving to Las Vegas is a smart one. Having that game be against the Chicago Bears so their fans do not have to see former linebacker Khalil Mack terrorize Derek Carr looks even smarter.

The first of the NFL’s four games in England takes place in a new venue, White Hart Lane in London. The $1.5 billion stadium, home to Tottenham Hotspur of the English Premier League, opened late during Spurs’ 2018-19 season. For this game, synthetic turf housed below the normal soccer pitch will be used for the playing surface.

Both teams are looking to raise the level of their play. The 3-1 Bears are struggling offensively and have Chase Daniel starting for injured Mitch Trubisky at quarterback. The 2-2 Raiders are seeking back-to-back wins for the first time this season while staying within touching distance of Kansas City in the AFC West.

Mack’s storyline, though, looms over this contest like Big Ben over the London skyline.

The backstory of the trade is well known, with Mack holding out during the preseason for a better contract while coach Jon Gruden was trying to put his stamp on the team in his return to Oakland. The deal came together quickly after the final week of preseason games, a blockbuster in every sense of the word.

The Bears got Mack, a 2020 second-round pick, and a conditional fifth-round 2020 pick in exchange for their first-round picks in 2019 and 2020 as well as a sixth-round 2019 pick and third-round pick next year. Oakland used Chicago’s first-round pick this year to select running back Josh Jacobs, who is ninth in the NFL with 307 yards.

Mack’s impact was immediate as a good defense became a great one. He recorded 12.5 sacks in powering the Bears to the NFC North title, helping them overcome some of the offensive shortcomings Trubisky had in his first full season under center. Chicago, which held 11 teams to 20 or fewer points last year, has conceded just 45 points in the first four games.

Mack has 4.5 sacks, which puts him on pace to shatter his career best of 15 set in 2015. He has helped Chicago’s run defense limit opponents to 61.5 yards per game and 2.96 yards per carry, ranking in the top three in both categories. That defense will be at full strength with Roquan Smith back after missing last Sunday’s win over Minnesota due to personal reasons.

The Raiders also dealt Amari Cooper to Dallas last season and let Jared Cook leave in free agency, forcing Gruden to rebuild the entire offense. They acquired Antonio Brown from Pittsburgh, but the mercurial wide receiver never played a down following a series of blow-ups and off-field transgressions that resulted in him getting cut.

Oakland’s new offensive core around Carr are growing into their roles. Tight end Darren Waller has team highs of 33 catches and 320 yards, while Tyrell Williams has four touchdowns among his 17 receptions.

The defense, however, remains a substantial work in progress. The Raiders have totaled 18 sacks in 20 games since dealing Mack, who has 17 in two fewer games. Oakland has yielded 1,150 yards and nine touchdowns through the air while recording only one interception.

Points at a Premium

With the Bears starting Daniel, their offensive woes are expected to continue. Take away its 28 first-half points against Washington, and Chicago has 38 in the other 3 1/2 games. Those struggles, though, become a wash with Chicago’s defense. Oakland is coming off its best offensive performance of the season but has not faced a defense like the Bears despite facing a superstar in Mack for all those years in practice.

Add in the lengthy travel to London, and a low-scoring defensive battle could be in the cards.