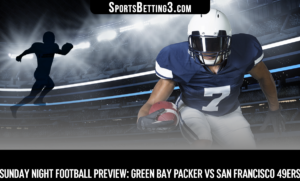 This week’s Sunday Night Football game has the potential to be one of the best, and most important, games of the year. The Green Bay Packers (8-2) take on the San Francisco 49ers (9-1). This winner of this game will hold the #1 seed in the NFC playoffs heading into the following week. This very well could be a potential playoff preview, possibly even an NFC Championship Game preview.

Is This Packers Defense Legit?

For the first time in seemingly forever, the Packers actually have a good defense. The last time that was said was back in 2010 when the Packers went on to win the Super Bowl that season. While the defense is certainly the best they have had since then, that really isn’t saying much considering how bad some of their defenses have been. This defense is a good unit, but far from elite.

The Packers are good at forcing turnovers as they have a +8 turnover margin (third-best in the NFL). That has overshadowed the fact that they allow the fourth-most yards of any defense on a per-game basis. This defense certainly does give up big plays but they do well to lock down when needed to prevent touchdowns (14th in points allowed per game).

The 49ers offense has the stats of a very good offense but a lot of that can be attributed to the very favorable situations their defense puts their offense in. The Packers pass rush will need to get to Jimmy Garoppolo and force him to make bad decisions. The Niners are a run-first team and do it well. Green Bay has struggled against the rush this season but defensive coordinator Mike Pettine needs to stack the box to stop the run and trust his secondary in single coverage to shut down the Niners receivers.

The Potency of Green Bay’s Offense

The Packers offense has yet to hit its full potential and that should scare the rest of the NFL. Green Bay has two top 10 MVP candidates in Aaron Rodgers and Aaron Jones. With wide receiver Davante Adams returning from a toe injury a couple of weeks ago, the Packer offense is set to go off on any defense, even one as elite as the 49ers. If the Niners defense has one weakness, it is against the rush (20th-ranked). We could see a big day out of Jones in this game.

Rodgers will need to avoid the heavy pass rush of the 49ers in this game. Rodgers is one of the best quarterbacks in NFL history against the blitz. If he can avoid the initial pass rush and move around in the pocket, which he does as well as anybody in the league, he can make plays with his feet and some big throws on the run.

The 49ers have one of the best defenses in the NFL. They have the top-ranked pass defense and will look to put pressure on Rodgers. They also allow the second-fewest yards in the NFL despite having the 20th-ranked rush defense. San Francisco is great at getting off the field on 3rd down (second-best in the league). They allow just 13.7 points per game, also second-best in the NFL.

The Packers are ninth in the league in scoring but their offense is more potent than that. The Niners defense won’t be able to completely contain this offense but needs to be effective enough from keeping Rodgers and that offense from controlling the game.

San Francisco is a very run-heavy team (149 yards per game). Unfortunately for the Packers, their defense struggles against the run (127 yards per game). Garoppolo has done well to act as a game manager and lead this team to victory almost every week. His throwing has been so-so this season as he has 10 interceptions on the season. However, he has come through in the clutch when needed, as evidence of last week’s last-minute win against the Arizona Cardinals.

The 49ers need to establish the run early in this game. Once they show the Packers how capable their offense is of running the ball, the field will open up for Jimmy G to go downfield to Emmanuel Sander and George Kittle (expected to return from injury this week). The play-action passing game of the 49ers will be a big part of their success in this game.

If the Niners are going to win this game it will have to be because of their offense. We know what to expect out of their defense and they should do enough to give this offense a chance at winning. However, San Francisco won’t be able to win this game by just scoring a couple of touchdowns. The 49ers will need one of their best offensive days of the season if they want to get a win in this game.

This game opened up with the 49ers as a three-point favorite. The line still currently sits there. As for the total, you will find 46 at most books. With a matchup between two elite teams like this, the low spread is fitting. The total also sits in an interesting spot as we have exciting matchups on both sides of the ball for each team. If the Packers cover, it will be due to their defense forcing turnovers and one of the Aarons taking over this game. If San Francisco is to win by 3+, it will be because their offense ran all over the Packer defense.