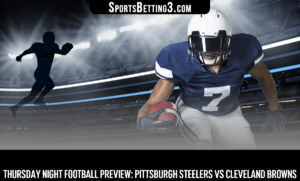 This week’s Thursday Night Football game features a matchup between two AFC North foes. The Pittsburgh Steelers (5-4) take on the Cleveland Browns (3-6). Pittsburgh is on a four-game winning streak after starting the season 1-4. Cleveland has fallen short of expectations this season but picked up a crucial win last week against the Buffalo Bills to keep their slim playoff hopes alive. Thursday’s game will be a critical one in the AFC Wild Card race.

What the Steelers Need to Do to Win

The Steeler’s season appeared to be all but over after just three weeks of the season. Pittsburgh was 0-3 and Ben Roethlisberger was sidelined for the season with an injury. Quarterback Mason Rudolph has done well to fill the void left by Big Ben and the defense has looked rejuvenated since the Minkah Fitzpatrick trade a month ago.

Running back James Conner has missed the last two games but appears on track to start on Thursday night. This will be a big boost to the Steelers’ offense both on the ground and through the air. Rudolph will now have one of his top receiving options back and the Steelers’ ground game will be in full force. With Cleveland having some offensive weapons of their own, getting their weapons back is exactly what the Steelers need to win this game.

Pittsburgh’s defense has been trending up during this four-game winning streak. If this team wants to be successful and make a legit playoff run, the defense needs to continue playing at a high level. After a slow start to the season, the Steelers’ defense is now ranked in the top half of the league in every major defensive category. Pittsburgh allows the 10th-least points per game in the NFL.

What the Browns Need to Do to Win

Cleveland has their back against the wall and they know it. Last week was a big win in Buffalo against a tough defense. This week against a rising Steelers’ defense the Browns know they need another strong offensive performance to win this game. Cleveland is only scoring 19 points per game (26th) but they have a solid rushing attack that averages 124 yards per game.

Running back Nick Chubb is having a strong rushing year in which he is averaging 5.28 yards per carry. Wide receiver Jarvis Landry is also having a big season as he has 652 receiving yards and is averaging 14.49 yards per reception. Throw Odell Beckham Jr. and his potential into the mix and you can see the potential the Browns’ offense has. Kareem Hunt is also back from his suspension giving the Browns’ a two-headed monster in the backfield.

The Browns defense is stout and underrated. They are seventh in pass defense and while they have allowed 24.6 points per game, you can see the potential this defense has (much like the offense). All that potential aside, there is one thing that is a must if this Browns team is going to start winning games. Baker Mayfield must start playing better. Mayfield is second in the league in interceptions (12) and 44th in rating among all NFL quarterbacks.

Cleveland is a 2.5-point favorite as os Tuesday afternoon. If the Browns are going to win, and cover, Mayfield needs to limit the turnovers. For Pittsburgh, sound defense and a solid night from Rudolph is the key to victory. A total of 40 doesn’t seem high but in a tough divisional game, points will be at a premium.