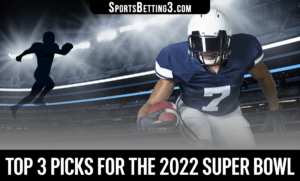 The regular season is over and the road to the Lombardi Trophy is here. While several teams have made a name for themselves this season, only three have proven to have what it takes to be Super Bowl Champions. If you’re not into cliches then you may want to turn around because my top three picks to win the 2022 Super Bowl are in order because of the team’s man under center.

You can’t have a Super Bowl without Tommy terrific and the Tampa Bay Buccaneers. Don’t let Antonio Brown’s antics during week 17 fool you, the Buc’s are very serious about repeating this season and have the best guy at the helm to lead them to it. With weapons such as Mike Evans, Tyler Johnson, Leonard Fournette, and Rob Gronkowski at Brady’s disposal, the Buc’s have more than enough firepower to get past any of the best defenses the NFC has to offer.

The Buccaneers have the third best odds to win the Super Bowl, but I believe they have the most complete team and are the highest value pick at +750 odds (Barstool Sportsbook). They have a tough route having to play the Packers in the divisional round, but they also represent the NFC’s best chance of stopping the Goliath that is Green Bay.

The Packers have been red hot all season and come into the playoffs on a six-game win streak of their own as the Aaron Rodgers revenge tour continues. They were the first team in the league to secure a bye and will have home field advantage up until the Super Bowl, which is a major bonus in Lambeau where they’re 8-0 for the season.

With wins over the Rams, Bengals, and 49ers the Packers have been a force to be reckoned with all year. Their coach, Matt LaFleur, is being heavily considered for coach of the year as they end the season with the best record in the league. They’re the current favorite to win it all at +350 odds (Barstool Sportsbook) so while they are not worth much value, they could be well worth using as a hedge for the Buccaneers.

There’s no question that Mahomes is the best quarterback in the AFC (even after his lackluster start to the year) and the Chiefs have been rolling since the middle of November. The AFC has been shaky and inconsistent all season but when the games on the line, Mahomes is the guy. The Chiefs defense is questionable and give up a lot of points, but their offense won’t be stopped by any AFC opponent.

The Chiefs possess perhaps the easiest road to the Super Bowl in their conference and will have to play the Steelers, Titans, and then likely the Bills or Bengals. While they’ve lost to the Bengals prior in the season, they are a very young team and it’s tough to see the Cincinnati defense holding up against Tyreek Hill and Travis Kelce during the playoffs. The Bills could potentially beat the Chiefs but with decisive losses to Indianapolis and Jacksonville this season, I doubt it. Chiefs at +425 to win the Super Bowl is a great value for their likelihood of bringing home the Lombardi Trophy.