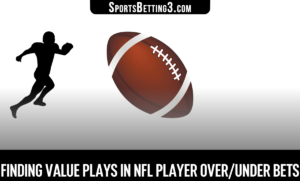 Fantasy football has raised the bar in terms of competition between oddsmakers and bettors with regards to NFL betting, and nowhere is that more obvious than over/under bets for players at skill positions.

Fantasy football players do deep dives on players and teams with the wealth of information available. The sheer volume of bets offered by sports books means there are likely a handful of plays where the baseline number is off by such a significant degree that a pick could result in easy money.

The challenge, of course, is figuring out who is productive. For example, the Tampa Bay Buccaneers ranked third in total offense in 2018 at 415.5 yards per game but 12th in scoring at 24.8 points per contest. That discrepancy could affect making a play on No. 1 wide receiver Mike Evans, who was third in the NFL in yards (1,524) but tied for 13th in TD catches (8).

The offseason is a huge variable with multiple factors — player movement, contract holdouts, injuries, and shifts in philosophy. It can be challenging sifting through all the plays available, but here is a six-pack starter kit to set you on your way.

Let’s start at the focal point of every NFL season — New England. Brady and the Patriots are the defending champions in search of a record seventh Super Bowl title . The 42-year-old is also looking to extend his own personal record by reaching the NFL’s pinnacle game for a 10th time.

Brady threw for 4,375 yards and 29 TDs in 2018, but matching those numbers could prove challenging for the sure-fire Hall of Famer. The biggest obstacle being the void left by retired tight end Rob Gronkowski, who created mismatches by vertically stretching the field.

His presence allowed the Patriots to operate without a No. 1 wideout for years, with slot receivers like Julian Edelman zipping into open spaces for short passes that became medium-sized gains. Edelman is nursing a thumb injury, and Gronkowski’s replacement — 38-year-old Ben Watson — will sit out the first four games for violating the NFL’s PED policy.

Brady does have a new target in wide receiver and first-round pick N’Keal Harry. He had 155 catches for 2,230 yards and 17 TDs in his final two seasons at Arizona State, but all rookie wideouts endure a learning curve before being trusted as a value target.

Brady has topped 4,000 yards in each of the last seven seasons he played all 16 games, but it may be a struggle for him to reach the 4,150 mark established as his over/under in 2019.

Bell was the marquee free agent running back this summer after sitting out 2018 in a contract dispute with the Pittsburgh Steelers. He landed with the New York Jets, who signed him to a 4-year, $52.5 million deal with $35 million guaranteed.

The two-time All-Pro may have the most to prove of any player after his season-long absence, but his dual-threat abilities are second to none. Bell has cleared 1,250 rushing yards and 600 receiving yards three times, and the latter is the focus since the over at 600 yards is being offered at +125 compared to -155 for the under.

Bell will take pressure off second-year quarterback Sam Darnold, but both — and by extension the Jets — will go as far as first-year coach Adam Gase’s schemes will take them. There is still plenty of mystery to the offense since Bell will make his debut in New York’s regular-season opener against Buffalo on Sept. 8. If Gase trusts in Bell’s pass-catching abilities — he had three seasons with at least 75 catches — than the over could return a nice chunk of change.

Beckham was involved in the biggest blockbuster trade of the offseason — getting dealt to the Cleveland Browns by the New York Giants. He will partner with second-year quarterback Baker Mayfield and former college teammate and wide receiver Jarvis Landry in an offense that has been hyped all summer.

Beckham can be a diva at times, but few in the NFL can match his pass-catching skills. He recorded his fourth 1,000-yard season in 2018 despite missing four games due to injury and is 10 catches shy of 400 for his career after just 59 games.

The over/under for catches is 89.5, a number Beckham should easily clear if he remains healthy. He has averaged 10.5 targets per game over his career, and with defenses less likely to double-team him because of Landry’s presence, the over is a strong play.

Goff has a tough encore act for 2019 after leading the Los Angeles Rams to the Super Bowl in his second full season under center. He threw for 4,688 yards and 32 touchdowns last year, yet oddsmakers have set his over/under for TD tosses at 27.5 for this year. Some of that may be the fallout from being unable to solve the Patriots defense in the Super Bowl, but this is a number that should be pounced on.

Goff will have the services of No. 3 receiver Cooper Kupp after he missed the final eight games with a torn ACL. A No. 3 wide receiver does not sound all that vital, but Kupp’s versatility in the passing offense hides formation wrinkles and prevents defenses from keying on players.

That lets Goff exploit coverage mismatches with all his weapons, which include fellow wideouts Robert Woods and Brandin Cooks along with running back Todd Gurley and tight end Gerald Everett. Goff also threw for 28 TD passes in 2017, which adds in confidence in the established number being too low and the fourth-year quarterback delivering the over easily.

The talk around Barkley when the Giants selected him second overall last year was that they needed a quarterback. New York drafted one this year in Daniel Jones, but Barkley could get more touches in his second season with Beckham gone and Golden Tate missing the first four games for violating the league’s drug policy.

Barkley proved his worth immensely with 1,307 rushing yards and more than 2,000 total yards from scrimmage. His over/under for rushing yards is slightly below last year’s total at 1,275, and until New York’s receiving corps prove themselves, Barkley will see seven and eight-man fronts often.

Tate’s absence early could result in Barkley needing a big second half of the season to reach that mark. And if the Giants are out of the playoff race and opt to give Jones playing time late in the season, that could also work against Barkley reaching that number.

Thomas is the newly minted richest wide receiver in the NFL after signing a 5-year, $100 million extension in July. An absolute stud, Thomas had a league-best 125 catches and finished sixth in yards with 1,405. He has 321 catches in his first three seasons and improved his yardage total each year.

His over/under for receiving yards is 1,275, and the over is attractive because the Saints are so reliant on Thomas. He and Brees had a completion rate of 85 percent on 147 targets, which were nearly 3.5 times the amount second-leading receiver Tre’Quan Smith had (44).

Brees bettered his single-season NFL record for completion percentage in 2018 at 74.4 percent, which means there is both volume and efficiency in throwing to Thomas. In today’s pass-happy NFL, they are the two best friends a bettor can have in taking the over.