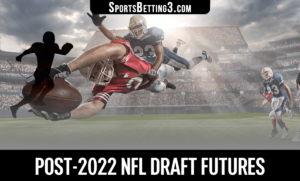 There’s no denying the NFL knows how to dominate the American sports news cycle. Following the 2022 NFL Draft in April, the league now makes a meal out of releasing the schedules.

With teams having made their draft picks, signed free agents, and got an idea of where they will be headed during the 2022 season, it is time to look ahead. Betting on division champions, win totals and who will win the Super Bowl now will provide the best value. While predicting the NFL isn’t an exact science, there are plenty of good opportunities to take advantage of now.

Pickett’s not ready for a charge

Pittsburgh had a veteran team that was on the rise. Now, the Steelers have the look of a franchise trying to rebuild to their storied past. Pickett completed 67.2 percent of his passes as a senior for 4,319 yards and 42 touchdown.

However, Pickett is now tasked with competing for veteran Mitch Trubisky for the starting quarterback job and working with a talented — but green — receiving core. Pittsburgh’s over/under for wins has been set at 7.5. With the under being plus money, it is a good bet to the Steelers regress under their new quarterback.

The Kansas City Chiefs suffered a brutal loss to the Cincinnati Bengals in the AFC Championship game last season. Kansas City at +1000 to win the Super Bowl may be a bargain after what some consider a strong draft. The Chiefs addressed their issues in the secondary by drafting Washington cornerback Trent McDuffie and Cincinnati safety Bryan Cook.

Western Michigan Skyy More was available for Kansas City in the second round and will be another weapon for quarterback Patrick Mahomes.

The Denver Broncos joined many NFL teams by trying to find their franchise quarterback now. Trading with Seattle brought Russell Wilson to Denver in return. During Wilson’s tenure in Seattle, the Seahawks played in two Super Bowls and won one.

Wilson, who is 33, had a difficult time last season on a Seattle team that struggled with injuries and effectiveness. Wilson did pass for 3,113 yards with 25 touchdowns and six interceptions. So what does this mean for Denver?

The Broncos went heavy on defense in the draft. Denver believes Wilson will help make their opponent more effective. The over/under for the Broncos’ win total is 10 games. While it is possible Denver will challenge for the division title, there is also a chance the meat grinder that is the AFC West will see the teams beat up on each other. The Broncos will go slightly under this total.

The Los Angeles Chargers haven’t had much team success under quarterback Justin Herbert. Last season, the Chargers were less than a minute away from returning to the playoffs. Then disaster struck against Las Vegas.

The Chargers spent their draft picks this season rebuilding what was the league’s No. 29 defense last season. Los Angeles grabbed three defensive backs in the draft, including Baylor’s JT Woods in the third round.

Woods will play at safety for a team that allowed an average of 27 points per game. Woods is a versatile player who is able to do a lot of different things. If Los Angeles can get its defense on track that will make life easier on Herbert. With their star quarterback playing with less on worries on how his defense will play, the Chargers are worth a shot at +1600 to win the Super Bowl.